A Cure For Sleeplessness

There was a time when he could sleep through the night and never open his eyes until noon, but those days were as far past him as the ones with wet dreams. Now he was lucky to get in four hours before his back woke him, or his goddamned prostate.

Roland Phillips stood on his front porch and breathed deep. He always started the day the same way; coffee on the porch and quiet time. After he retired from the fire department, calm mornings were a gift he couldn’t ignore, and in the fall there was always a deep restlessness in his bones that made him unable to sit still. Perhaps it was the uneasy similarity between October and this point in his life, when everything seemed like a preparation for endings.

The problem was, he had so much left to do. Sleep was often sacrificed in the name of What-If, a game he played with himself when his mind wandered like an old man in the woods. If he’d started his operation in his youth, he’d be in the clear now, able to escape the hills and the small people he was forced to keep in his employ. How he hated them, the lowlifes with their body odor and missing teeth and the one-hitters hidden in watch pockets. In his old life he had been a respected member of the community, had won awards for his service. Now he had to depend on convicts and weirdos to help him secure his retirement fund.

Not that he was afraid to get his hands dirty. Working in the soil, raising something from nothing, had become second nature to him. Saving lives had been a rewarding job, but here was the real reward: the smell of earthworms and growing things.

No one had told him the job would demand violence, though, and sometimes he resented it. The blood smell, like the slaughterhouse just down the road from his childhood home; the squirreling around after dark to hide things. The extra work tugged at his patience.

Sometimes, though, when he’d had enough time for an indiscretion to marinate, the work was almost soothing. He felt it first in the arms, that sore relief which only came from getting something one had worked hard for and truly deserved. It was the only thing that secured a full night of sleep with no restless tossings.

Roland slung the cooling dregs of his coffee out into the yard and headed back into the house. Daylight was scarce these days, and he had a thief to deal with.

When he opened the front door, a young man with half an eyeball laying on one cheek began to scream.

“Ain’t nobody gonna hear you way out here,” Roland said, bemused. “I bet your throat is sore from all that wailin’. I’ll tell you what: give me a number and I’ll get you a tall, cold beer.”

The man’s cries wound down slowly, like a tornado siren dying. He panted, chest straining against the ropes that held him to a kitchen chair. “What? What number?”

“C’mon,” Roland said. “Tell me about your dreams and machinations. How you were planning to rob me, little by little, for your own interests.”

Roland’s arm whipped out quick as a snake, flashing silver at the hand. The man’s screams began again, more intense than before, as his other eyeball slid from its socket. In the dim room, it was little more than a spectral suggestion on his cheek, like something almost pretty. A flower, maybe.

“How many plants did you take?” Roland asked once the man’s screams had reduced to gurgles. “Did you smoke up with your friends and have a good laugh at the frail old man you stole from?”

The man laid his head back, tilted it up toward Roland’s voice. Beneath the blood, his ruined face was resigned.

“Yeah,” he said hoarsely. “I took five plants and me and my friends, we smoked ‘em all. Every last one.”

Roland smiled a great and terrible smile. He raised his arm and thought, with relief, how easy sleep would come later. 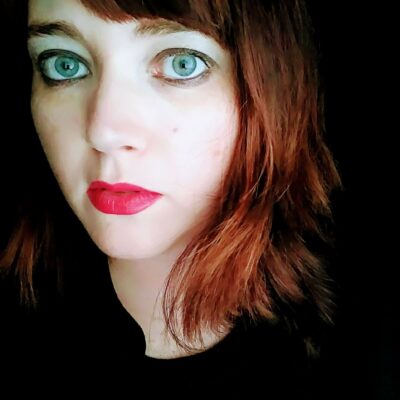 Amanda Crum is a writer and artist whose work has been published in Barren Magazine, Eastern Iowa Review, The Hellebore, and more. She is the author of Tall Grass and The Day You Learned To Swim; she is also an Indie Horror Book Award nominee. Amanda currently lives in Kentucky.