He’d come home just in time to watch her die, having missed the real dying. The back room ripe with it, dark with the blinds drawn. Took him all of one afternoon after she was laid down and covered with dirt to strip the pipes and tin roof. A full truck bed and a stop at the scale and it was us goin’ to see a man in Albuquerque about some work, and the overheard phrase not to cross state lines echoing in my head as the jagged hills faded into night, just to be rubbed clean off the map by the time the morning light dawned.

“But what about school?” I asked.

He looked at me so long I thought he might run us off the road into the buckbrush and briar.

“Yeah, you guess right. Waste of time any-damn-way. I never finished school and look at me.”

I didn’t want to look.

“This here’s your school,” he said, slapping the dash, then pointing out at the wild landscape, glimpsed only in flashes as our low beams tore through darkness. “It’ll learn you all you need to know.”

His right hand struck then like an uncoiled copperhead, stopping so close I could smell the blood still in the creased flesh, knuckles gashed back in a Baton Rouge restroom, where two went in and only one come out. The fist sent me flinching into the window glass, and he scoffed, disgusted. “Boy, your mama was a fine woman, but goddamn if she ain’t make you soft in the spine.”

I thought about the Tennessee fortune teller. Your heart line is fractured, your life line short. How he yanked his palm away from her and spit on the floor. I thought of the pills he ate like candy to keep his blood thin, pictured it running slow like molasses or the lazy sap in a tapped hardwood.

“You take the wheel for a bit,” he said. “Keep it straight. I’ma get a little shut-eye.”

“What are you, fifteen?”

“Fourteen,” I said, not reminding him it was the day before my twelfth that he got popped this last time.

“Well hell,” he said. “Gonna have to teach you tomorrow, ‘cause we’ll need you knowing how. You always gotta have you a driver. Remember that.”

He pounded a balled fist against his chest and coughed. It was a deep, terrible rattle. Then he chewed up another pill from the slim orange bottle and pulled off at the next looming vacancy.

Within a couple hours a pint of Jack had put him under, and I lay counting the stained and sagging tiles above me, listening to every small shift inside and out. My heart was like a hard hand knocking, his breathing a rusty saw blade run through bone. Every old spring in the bed cried out as I finally rose up and emptied his boots. The pistol and the pills. The money from the man who never left that restroom stall.

I slipped away, a whisper, and made a call from the phone perched crooked beneath a streetlamp’s hazy glow.

Standing at the edge of darkness and light, I emptied the pill bottle and crushed them into the dirty pavement with my heel.

It would be a couple hours before he woke, blood thick in his veins, before the sun broke over the east horizon and spilled like a pot of hot steel across the gulf. I imagined his face as they burst through the door, or as his heart burst inside him. I recalled Ma’s lessons, how we had practiced, as I got in behind the wheel and slid the spare key into the ignition, and I heard her voice, her last words as it turned over. Be better, she said, and I would wonder if I could be as I crossed from one state into another, never knowing which fate found him first. 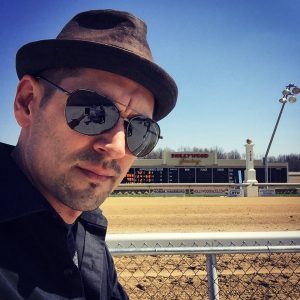 William R. Soldan grew up in and around the Rust Belt city of Youngstown, Ohio, where he lives with his wife and two children. A high school dropout and college graduate, he holds a BA in English Literature from Youngstown State University and an MFA from the Northeast Ohio Master of Fine Arts program. His work appears in publications such as New World Writing, Kentucky Review, Gordon Square Review, Thuglit, (b)OINK, Mystery Tribune, The Best American Mystery Stories 2017, and many others. He's at williamrsoldan.com if you want to connect.