“Dude, we always go to Alberto’s after.”

Steve adjusted the rearview mirror so he could see Brandon in the back seat. Brandon was still holding his ear to the side of his head as if holding it in place long enough would re-attach it. He had his other hand over the hole in his stomach. Steve figured if he was dead his hands would drop. Other than the hands there was no indication Brandon was still among the living.

“You forget the part where Brandon got shot?”

Brandon made a noise somewhere between a whistle and a groan.

“Are you fucking kidding me? He needs a hospital.”

“Then why do you want to go to Alberto’s?”

“I know what you order asshole. I want to know why you want to go there instead of the hospital.”

“Instead? Who said anything about instead? We can hit the drive-through then take Brandon to the hospital.”

“Did we go to Swinging Dick’s Saloon? Like we always do?”

“Did we drink Abominable Ninja IPA by the pitcher? Like we always do?”

“Then we go to the Berts like we always do. It’s how we finish Friday night.”

“We don’t always decide to rob the Stop and Shop.”

“True but I don’t see how that negates my Carne Asada.”

“It doesn’t. It’s the part where the clerk decides to go all John Wick on us and shoots off Brandon’s ear.”

“Speaking of the clerk did you see that dudes head explode?”

“Uh, yeah I was the one who shot him while you were hiding by the slushie machine.”

“Blood makes you queasy, doesn’t it?”

“Just shut up. We’re almost there.”

“No, you shut up and turn this car around. I need my Carne Asada.”

Steve looked over to tell Greg to shut the fuck up and saw he was pointing the Colt .32 he stole from his uncle at him.

“You going to shoot me if I don’t take you to Alberto’s?”

“It’s how we finish Friday night.”

“You having a Carne Asada burrito is more important than Brandon bleeding out?”

“He’ll be fine. I bet he wants something too.”

Greg turned to Brandon who was still holding his ear to the side of his head so theoretically still alive, “Want some Berts?”

Brandon made the same whistle groan.

Greg turned back around, “That sounded like a yes to me.”

Steve pulled the car to the curb.

Greg looked and saw Steve was pointing the Smith and Wesson .40 he used to blow the head off of the clerk at Stop and Shop at him.

“What are you doing?”

“I’m taking the gun you threatened me with and then I’m taking Brandon to the hospital.”

“I didn’t threaten you with it…”

“Okay, I did but you know I wouldn’t shoot you. I was just fucking with you.”

“I’m not fucking with you. Give me the gun.”

“Or I fucking blow your fucking head off.”

Steve shot Greg through the eye.

Even though Greg was dead he took the gun away.

He looked back. Brandon was no longer covering the hole in his chest or holding his ear in place.

There was no reason to go to the hospital now.

After he dumped the bodies Steve pulled into Alberto’s drive-through. He knew he should be getting rid of the guns and cleaning the car but Steve was right. Alberto’s was how they finish Friday night. 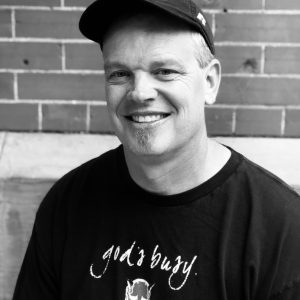 Todd Morr is a writer and musician currently living in Colorado. He has a bachelor’s degree in Fine Art but decided if he wasn’t going to make any money he preferred playing guitar and writing stories full of violence and profanity. He has had novels published by 10th Rule Books, Spanking Pulp Press, and Fahrenhieght Thirteen and short stories at places like Horror, Sleaze, Trash, Shotgun Honey, and Out of the Gutter.