One lighted window shined in the mass of darkness of the industrial park. The dashboard clock said 3 a.m. I yawned and looked over at Green Johnny, fidgety in the passenger seat, downing a fourth energy drink.

“You know you’re not going to be able to sleep after that.”

“So, I like it quiet after a job.  It’s not quiet when you’re babbling next to me.”

I nodded as Greenie finished off the drink and threw the empty can on the floorboard. We were both weird in an odd line of work.  We square debts for the Boss.  They call me Priest because I take an Old Testament approach to things and I can get downright Biblical with my Bowie knife. Green Johnnie is a documented paranoid psycho. Separately we have issues, but together we complement each other like red wine and steak.

The building door was open and we let ourselves in. We were instantly swallowed by the cavernous darkness of the warehouse.  Letting our eyes adjust, we soon found the stairs leading up to the light. Vivaldi’s Winter trailed down the stairwell, adding an air of refinement.  At the top we were met by counters covered in terrariums identified with Latin names like Pepsis thisbe, Dasymutilla occidentalis, Solenopsis richteri, and Paraponera clavata. Our quarry was wearing a white lab coat and hunched over a microscope with his back to the door.

Consorting with scientists wasn’t our usual job.  The Boss was dipping a toe into legitimate business and had invested a good chunk into some research hoping for a Big Pharma payday. Dr. Dimitri Lagasov had been experimenting on venomous insects to see if their toxins would have pharmaceutical applications.  Problem was all he’d produced so far were grandiose theories and no tangible results.

He jumped when Greenie tapped him on the shoulder.  “Wh-who are you guys?” he said, fumbling with his coat.  “There’s nothing to steal here, nothing of street value, at least.”

His eyes widened a bit, but he quickly tamped down his surprise.

Greenie was walking around, butchering the Latin names on the enclosures and tapping on the glass with a jittery finger.   “This science stuff reminds me of school.  I didn’t like school.”

“I’m not surprised,” Lagasov said under his breath.

“N-nothing, look,” the doc said, straightening in his chair with academic haughtiness. “This is highly intricate work; it takes time.  I’ll pay when I have results, not sooner.”

“Look, the Boss sent us for money or results.  You give use either of those and we’ll be on our way. If not, I’ll have to show you why they call me Priest,” I said, reaching for my Bowie.   Before I could fully unsheathe the knife, though, I suddenly became acutely aware of my surroundings.

“How dangerous are these things?” I said, gesturing to the enclosures.

“They’re potent, and painful, but not too dangerous unless one is allergic to their tox—.”

Before Lagasov could finish I saw a terrarium fly through the air and crash at his feet. Three more followed it. A menagerie of multi-legged horror started crawling up the doctor’s legs.  Within seconds, he was covered.  Animalistic sounds of primal terror sprang from his lips.  His body became a convulsing blob of sweat until it sputtered out like a bad engine starving for gas.

“What the hell?” I said to Greenie once we were in the safety of the van.

I shook my head and sighed.  “God damn energy drinks.”

“What were those things anyway?” Greenie asked, settling into the passenger seat.

I pulled out my phone and searched the Latin names that had been on the terrariums.

“According to Google, the doc was attacked by an angry mob of tarantula hawks, and red velvet, black fire, and bullet ants.

“Which one killed him?”

“Hard to tell, it was a pretty big swarm.”

“Sounds like school,” Greenie yawned, “now I’m sleepy.” I nodded and started the van.  Greenie slept the whole way back. 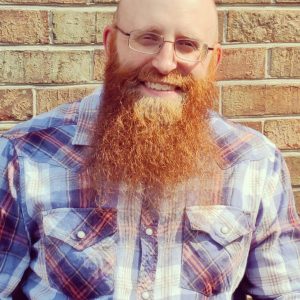 Zachary Wilhide is a writer and artist who lives in Virginia Beach, VA with his wife and cat.  He has previously had stories published in Out of the Gutter Online, Spelk Fiction, Close to the Bone, Yellow Mama Magazine, and Shotgun Honey.