It was July 4th weekend. Sticky, like a giant snow cone had dripped all over us. Her  folks’ pool we had to ourselves: an above-ground piece of shit.

No more shore house. “Thanks to you, Sue,” Angie sneered.

Weeks back, at her friend Nina’s, I’d fucked Joe, Nina’s boyfriend’s brother, on the bathroom sink. With “Sweet Child of Mine” blasting in the background.

From our spot in Angie’s yard, we could see her neighbors’. All concrete, with a built-in, kidney-shaped pool, like in an old movie. A cabana, too. Like this was Hollywood instead of the dregs of Jersey.

New money, we heard they had. Maybe from drugs. Not Mafia, ‘cos they were Spanish.

“¡Hola!” Esperanza yelled to us, waving. Miguel wasn’t as friendly. He’d nod, then turn back to his rich man’s pool.

Parties, they had, with bands. Drums, even a trumpet. “All night long,” Angie told me. “Salsa. Laughing. Screaming. Dad almost called the cops. But . . .”

With that guy, I thought, even Uncle Vince knew better.

Angie sat up, sniffed the air. “Smell that?”

Lighter fluid. Next door, Miguel was firing up the grill.

Soon, a delicious aroma filled the air. Like something you imagined a king would feast on. Or a Hollywood bigshot.

Chicken. Juicy, with those tasty Spanish seasonings. My stomach growled.

“I think,” she said sadly, “There’s burgers in the freezer.”

The bushes parted and a sunburned Esperanza came through. In the red bikini top she was too big for, and flowered sarong, she might’ve just hopped off a cruise ship. In each hand was a napkin-covered paper plate, smelling as delicious as what was on their grill.

Last night’s makeup was smeared, like she’d cried it off. As she set the plates down, her sarong moved enough to show her bruised thighs. Different-colored bruises: purplish-gold and light blue.

That wasn’t eye shadow, I realized.

“Thanks!” I said. Her mouth full of chicken, Angie nodded. Her eyes said she’d seen what I’d seen.

I picked up the chicken leg, grabbing the napkin before it blew away.

On the underside was scrawled, “AYÚDAME.”

I didn’t speak Spanish. Not even Italian, and my folks hated that.

“You speak Spanish?” As I held up the napkin, the bushes parted again.

Miguel. Smiling like the killer doll from that scary movie. Carrying frozen drinks, no way we were drinking.

“Thank you,” Angie said. Miguel laughed at the pile of bones on her plate.

I balled the napkin in my fist.

I forgot all about it once we drank Uncle Vince’s PBRs. Counted how many guys we’d each fucked, the summer before. I beat her by two.

The balled-up napkin rolled away.

“Get over here!” Angie said. In the background were sirens, static radio.

Cops blocked the scene next door, but we saw enough.

The water in that fancy pool was deep red, now, like from a real giant’s kidney. Or…heart.

A fight to the death. Miguel was chopped up, bad. I imagined his organs sunk in the gory water. His cock and balls hacked off first.

Like we were kids again, Angie and I sat huddled, in her yard. This was worse than any scary movie.

If only we could’ve done something to help.

Was it meant for me? Or something to be picked up at the store? Liquor, or food . . .

Or maybe what they called that chicken . . .

That was really, really good. 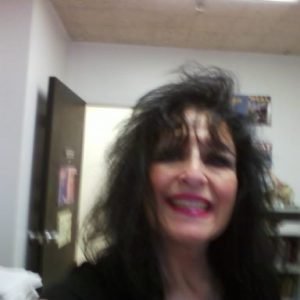 Cindy Rosmus is a Jersey girl who looks like a Mob Wife & talks like Anybody’s from West Side Story. She works out 5-6 days a week, so needs no excuse to drink or do whatever the hell she wants. She’s been published in the usual places, such as Shotgun Honey, Hardboiled, A Twist of Noir, Megazine, Beat to a Pulp, Out of the Gutter, Mysterical-E, and Dark Dossier. She is the editor/art director of the ezine, Yellow Mama. She’s a Gemini, a Christian, and an animal rights activist.