Della hobbled down Bourbon Street, dodging drunken tourists. The fifty-dollar bill she’d shoved inside her bra made her tits itch. Her stomach lurched at the stale beer, body odor, and urine stink. Pedestrian chatter blended with the mix of music, making the air seem to pulse.

Remy’s words as he’d handed her the cash, “we’ll be back after last call, cher,” burned in her brain. His voice, all smoke and silk,never failed to make her sex drive sizzle like a fryer full of beignets, but pain overrode her fantasies of getting down and dirty with her sister Rose’s husband. Each step brought a stabbing pain to her insides.

She jiggled the warm bundle in her arms and peered at her bare legs, bracing herself for the all-too-familiar trail of blood and chunky bits. Luckily, her knobby knees and sunburned legs remained free of womanly gore. When her latest pee stick turned pink, she’d drawn an x on Marie Laveau’s tomb with blessed chalk every day for a month, but like the dozen or so other babies she’d conceived, instead of settling in, the latest embryo had oozed out of her toxic womb.

Rose hadn’t needed magic to conceive or for her daughter to be born pink and perfect, but she wasn’t above using sorcery to sell real estate. She planted a Saint Joseph statue upside down in the lawn of each house she brokered. Even though she never bothered to unearth them afterward as the ritual required, no agent sold a house faster than Rose.

Della could relate to all those plastic saints trapped in the dark, ever alone and slowly suffocating. She was sick of waiting to be rescued while the Roses of the world reveled in their good fortune. She, like the hundreds of Saint Josephs buried in yards across Louisiana, deserved some karmic relief.

Eager for some statue voodoo of her own, Della had planted the bitty baby Jesus she’d discovered inside a hunk of multicolored king cake deep within herself. She prayed gravity wouldn’t send the tiny toy tumbling into her panties. Because of the way its legs locked at a ninety-degree angle from its torso, the insertion left Della aching as though the plastic figure had clawed its way inside.

On St. Ann Street, a woman in a stained sundress used a street sign as a stripper pole. She grinned at passersby with meth-rotted teeth while she wiggled her ass and pranced. Men hooted and leered, waving crumpled dollar bills. She yelled curses at a teenager in a Saints jersey who took a selfie with her and scurried away without offering a tip.

Della dug the fifty from her bra and handed the sweaty bill to the woman.

“Whatcha got there?” The wannabe stripper squinted at the bundle in Della’s arms.

Della backed away and headed toward Jackson Square. She’d rather dance for money than keep the cash Remy paid her before he and Rose hit the clubs. Babysitting their infant always left her feeling as though every damned Mardi Gras float had rolled right over her heart.

Rose was the prettier one, the smarter sister, the sibling most likely to succeed. She’d scored a thriving business and a sexy Cajan husband. Yet, Della only coveted one of Rose’s many blessings. A child overflowing with unconditional love would keep Della clean and give her life focus. Otherwise, she might as well join the woman in her dollar dance, hoping one of the men would offer her the temporary escape sex and drugs brought.

Della held her bundled niece to her nose, breathing in the babe’s talcum powder and dirty diaper scent. After rubbing another finger of Kalua onto the baby’s gums to keep her quiet, she slipped the infant into the shadows. She made her way back to the crazy chaos of Bourbon Street, leaving her sister’s child to the chilled night air and to the ghosts who haunted Jackson Square.

Rose, who had always had everything, would know loss. If the king cake baby voodoo failed, at least Della would no longer be alone in her pain. Being bound by blood and sorrow was in itself the most primal magic. 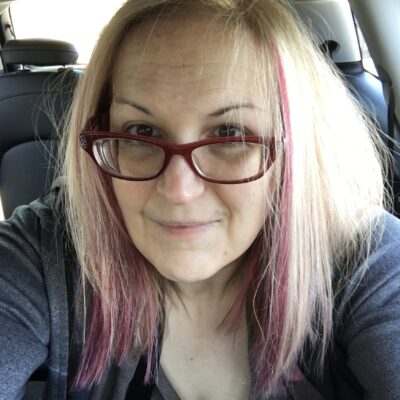 Serena Jayne received her MFA in Writing Popular Fiction from Seton Hill University. She’s worked as a research scientist, a fish stick slinger, a chat wrangler, and a race horse narc. When she isn’t trolling art museums for works that move her, she enjoys writing in multiple fiction genres. Her short fiction has appeared or is forthcoming in the Arcanist, EconoClash Review, Space and Time Magazine, Switchblade Magazine, Unnerving Magazine and other publications. serenajayne.com Twitter: @SJ_Writer