The woman onstage looks around 60. She is wearing purple sequinned bikini bottoms and mismatched shoes. Her skin is tanned brown like leather. It reminds me of the suitcase my mother packed when she walked out on me and my pederast father all those years ago. Her stomach is swollen, and it looks like she is pregnant, but she can’t be, can she?

I keep staring at her, hoping it will help me blot out what Banyan is saying, but it doesn’t. Not really.

Donald Fuck waddles back to our booth, clutching a tray of drinks. The cocktail he passes me is the color of lung-blood. I first met Donald Furkovski – Donald Fuck to his friends – when he was peddling his huckster shtick down in Orlando, trawling tourist hotel cocktail bars for marks.

He is a British ex-pat – wider than he is tall. When we met, his wallet was full of stolen credit cards and gas station business cards. Back then, he had a crummy side-line charging tourists $10 a pop to watch an ex-wrestler named Freddie Regal train at a strip-mall gym called Knuckle Town. Freddie didn’t train very hard – his double hip-replacement saw to that. His face was swollen, his hairline further back than it was when he was still on TV. He would strut around, do a few squat thrusts, and then let the kids try on his grubby old title belt.

Knuckle Town was shut down after the cops realised that it was a front for a high-stakes poker ring. I was manning the door when they arrived. The sawed-off shotgun with pistol grip they found holstered beneath my jacket bought me a three-year jolt in the Big House. Donald, predictably, was nowhere to be seen.

I was surprised when Donald picked me up this afternoon, outside Santa Rosa Correctional Institution. Told me he owed me. Told me he would make me rich.

I’m still wearing the same grey suit and black silk shirt I wore in court. Even in a dive like the Slop Shop I am conscious about the clumsy teardrop tattoos on my cheeks… the thick-lensed coke bottle glasses the state provided… my patchy buzz-cut.

Banyan sips at his cream liqueur.

“Donald says you can procure me a boy.”

I drink my cocktail and stare at the dancer. She stumbles and her glasses slip off her face, onto the floor. A man in the front row – wearing a camouflage jacket with the sleeves hacked off – steps forward and tries to grab her pussy.

The dancer slaps him across the face.

“I need him by Friday night.”

The redneck shatters her jaw with one punch.

Banyan grins woozily at me. I feel hot sick rising in my throat as I nod my agreement.

I arranged to collect my fee from Donald on the way to Banyan’s gated community. He wanted to inspect the boy before delivery.

Cheap bastard told me that he would deduct $100 from my $1,000 finder’s fee for every year that he suspected the boy was over the age of 9.

We meet in the far corner of the Slop Shop parking lot. Under the sodium glare of the cracked streetlight Donald looks pale and hollow-eyed.

He flashes me a queasy grin.

I pop the trunk, and the stink of dead flesh oozes out. The broken body has started to bloat. Banyan’s asshole gapes open preposterously, and a chunk of his lower spine is missing.

Donald turns to me, incredulously, and I damn near take his head off with my shovel.

I found Banyan last night, cruising for rough trade in the labyrinthine concrete sprawl around Testament Heights. I dragged him out of his SUV and beat him like a rented mule. When I was done I stuck my father’s shotgun in Banyan’s asshole and blew a hole right through the sick fuck.

I heave Donald’s lumpy body on top of Banyan’s bloated corpse and struggle to shut the trunk.

Time to work up a sweat.

It’s going to be a deep fucking grave. 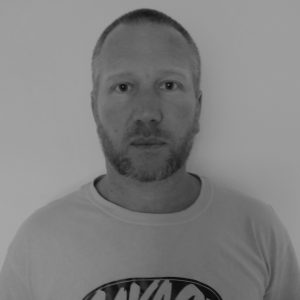 Tom Leins is a crime writer from Paignton, UK. His books include Meat Bubbles & Other Stories, Boneyard Dogs and Ten Pints of Blood (all published by Close to the Bone) and Repetition Kills You and The Good Book: Fairy Tales for Hard Men (both via All Due Respect). His new book, Sharp Knives & Loud Guns, will be released by All Due Respect in December 2021. For more details, please visit: https://thingstodoindevonwhenyouredead.wordpress.com/