They set sail from Cape Canaveral in a twenty-eight foot Mako 284 CC. The navigation was set for 20 miles out. The gear was rigged for tiger sharks.

Hal, the guide, and Winston, the client, stood firmly at the center console, tensed to stay standing as the boat took on the swelling waves.

“So tell me, Winston,” Hal began. “What kind of young man has time for a deep sea venture in the middle of the week?”

Winston smiled. “One who only works when he’s called for. It’s a bit brash, but, I’m something of a corporate tool— a gut-man, you might call it. Big head honchos send me to a regional branch to plug in for a few weeks, and I clean the place out. Execute poor performers, promote the cream of the crop, or burn the place down if enough money can’t be made. But I tend towards the execution piece, if I’m being honest.”

“Considering the collective, low IQ of the American workforce, I’m not surprised.”

“It’s also easier that way. Taking someone out is far less dramatic than a promotion. A quick bullet to the head is cheaper than a parade, believe me.”

“And the lack of drama lets me hit the coast and chase some thrills. I swear I’ve about exhausted every shark-fishing charter from Montauk to Tybee Island. Never been so far south as these piss-warm Floridian waters, though.”

“And this is what you do for a living? Full-time?”

“I’ve been a shark hunter for as long as I can remember. Not just in Florida but all over, which of courses displeases the Mrs. I go where the big ones are; bastards so big they think nothing can hurt them. Then, they get a hook in the mouth and become little more than a notch on my belt.”

“The most despicable. But after a run-in with me, there’s no more killing to be done.”

Winston pointed starboard. A hatchet was tucked beneath the gunwale. “I guess that comes in handy, then.”

Hal stopped the boat once they hit blue water.

They hung two, five-gallon chum buckets port and stern, peppered the water with all kinds of slimy fish parts, and emptied a two-liter of tuna blood like a skirt about the boat. Winston thought it was overkill, but Hal assured him—the tigers would come, and they’d be big.

While Winston set the rods in place, Hal took a whole barracuda from the freezer and quickly divided it with the hatchet from beneath the gunwale.

“Nothing stinks like a cuda,” Winston said, smelling it on the breeze.

Hal looked over the side of the boat and into the deep. “I think these puppies would eat just about anything. They’re swirling like reverse vultures down there.”

Winston came and took a peak for himself. “Oh, yeah. Just like you said, too. Real man-eaters.”

He then lodged the hatchet deep into Winston’s oblique, and before he could even begin to bleed, shoved him overboard.

The voice on the other end of the line sighed. “Did the sharks like him?”

“Licked him clean to the marrow.”

“Jesus Christ, Clark. This line of work pays but not enough to put on a Hollywood production every time someone needs to go.”

The voice laughed. “It’s not my money. Or my effort.”

“Wasn’t as much as you might think. Put an ad in the yellow pages, booked out all the competitors, rented what I needed. And that was that.”

“If it makes you happy. Anyway. Get back to Pittsburgh. Got another job for you.”

The line clicked, and Clark caught the next plane. 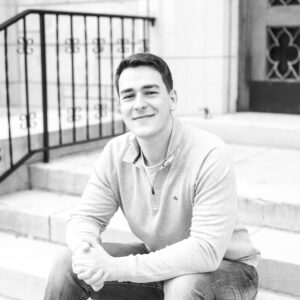 Hollis Miller is a young crime writer from North Carolina. He was first published by Murderous Ink Press in 2021, appearing in the November edition of their Crimeucopia anthology. He teaches English and creative writing at the high school level.