When he finally came back to town, we heard he found work down on Brook Street. The Home Depot they got over there. Spending his wage drinking himself blind in O’Connor’s bar on Smullet. His mother ran one of those little greasey-spoon kind of places next to the bus depot. I used to go in there early mornings when I was in between jobs. Never had to catch a bus anywhere or nothing like that. Just liked the breakfasts was all. Way she cooked the bacon. Real crispy. The way she served my coffee. Real bitter. My father always used to take me there for breakfast when we’d go hunting together, before he stopped, that was.

The boy, I say ‘boy’, but he was more a man when he died, he dated my little sister through high school. Took her to the senior prom. Bought her one of those flowers. A corsage. Remember it was purple. My sister’s favorite color. Went real pretty with her dress, and her eyes too. She was real happy about it. He pinned it to her breast, right there on the front porch. Even had one of those flashy limousines rented and all. She came home crying that night. Real late. Father never did like him much after that. My mother, she’d died a long time before, cancer of the blood, she never had no say in it either which way. But Marie, my sister, she was stir-crazy about that boy. She was my little sister, if she was smiling, it was good enough for me, I supposed at the time. Was only after, I realized I’d seen her cry more times than I did see her smile.

Yeah, after she died nobody saw him around town for a long while. Nothing. People said he’d just upped and moved across state or something like that. But folks, they always come right on back home sooner or later, my father used to say. The school, they did this special graduation ceremony just for Marie, on account of she never got to graduate. She passed right before. The special occasion stolen from her, my father said that too. The coroner man they got working with the sheriffs department said it was an overdose of prescription medication. A suicide. She never left a note. Not that it mattered none. She was still gone.

Last winter, they finally found the boy out by the old railway tracks in one of those abandoned train sheds. What the stray dogs and rats hadn’t gotten at first. Single gunshot wound to the head. Shotgun by his side. The coroner, he said it looked like another suicide.

Never got over the death of my little sister.

That place, the greasy-spoon café was closed up for a long time after they discovered the body. Had to find somewhere else to take my breakfasts. I guess it was breaking into late-Spring by the time the OPEN side of the cardboard sign on the door faced out at the bus depot again, all fresh faced like a new kid at school.

Of course at that time, I was still in between jobs. I went on back there but the breakfasts just didn’t taste the same. Kind of tasteless. The kid’s mother, she wouldn’t look me straight in the eye. Wearing her son’s death over her face like a thick cloud of tobacco smoke. Same way my father had worn my sister’s. One morning, she dropped a tray of dirty plates. I watched her pick up the broken pieces of porcelain with hands shaking uncontrollably. I pushed my own plate aside, paid the check and never did eat there again. 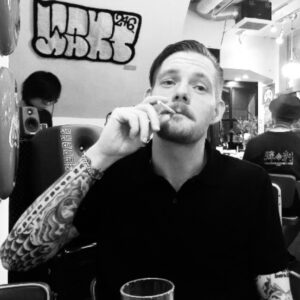 Stephen J. Golds was born in North London, U.K, but has lived in Japan for most of his adult life.

He writes primarily in the noir and dirty realism genres and is the co-editor of Punk Noir Magazine.

He enjoys spending time with his daughters, reading books, traveling the world, boxing and listening to old Soul LPs. His books are Say Goodbye When I’m Gone, I’ll Pray When I’m Dying, Always the Dead, Poems for Ghosts in Empty Tenement Windows I Thought I Saw Once and the story and poetry collection Love Like Bleeding Out With an Empty Gun in Your Hand.