Jan watched as he came through the front door, leaned the dirty shovel against the wall, and took off his muddy boots. She ran up, threw her arms around his neck, and kissed him. She didn’t care that he was sweaty and covered in dirt—in fact, she kind of liked it.

“It’s finally over, isn’t it Frank? We can finally be together now, can’t we?”

“You should call me Teddy. Better to get in the habit now so we don’t slip up in front of people.”

She was glad her husband was gone and much happier with Frank. He was more articulate, more intelligent, and much more satisfying as a lover. It was as if she’d simply upgraded to the better version of something.

He went to the kitchen, washed up, and finished cooking dinner. She followed him in. She was excited about the upgrade.

“I just hated his stutter,” she said, speaking of her husband. “And he couldn’t cook, not to save his life,” she said, laughing at her own joke. “And in the three years we were married, he never once took me anywhere nice. Always that same crappy motel on the beach. To hell with that motel.”

He laughed and she gave him another rushed kiss. When the food was done, he brought it out to the dining room table. Then he uncorked the wine, poured two glasses, and lit the candles.

“Turkey piccata,” she said, dropping a napkin on her lap. “It’s one of my favorites.” She took a bite of turkey and sauce. “And it’s delicious.”

She ate quicker than he did. He wasn’t all that hungry and stuck to wine, smiling at her jubilation. The fact that his cooking had been so well received pleased him.

He went to the kitchen and brought out a small bowl of cherry ice cream.

“Okay, but don’t drink too much, mister. I want more than just ice cream for dessert.” She gave him a mischievous smile, finishing the bowl of ice cream rather quickly. “Oh, I’ve got brain freeze now.”

They both went to the couch and sat down. She put her hand on his leg. “Why don’t you get out of these dirty clothes?”

The brain freeze wouldn’t let up. “Maybe it’s the wine mixed with the ice cream,” she said. “I’ve really got a headache.”

“Maybe you need an aspirin,” he said.

The room began to spin as she got to her feet, then she stumbled toward the bathroom. She got the aspirin from the medicine cabinet, seeing Frank’s reflection in the bathroom mirror.

Frank had known that Teddy had been gone the past month or so—gone seeing a speech pathologist without telling Jan, and taking cooking classes on Mondays and Wednesdays, and working overtime to afford another romantic getaway to their favorite spot on the beach. And Frank had gone to see Jan while Teddy was away, and they became passionate lovers. But Teddy had figured it out and there’d been a confrontation. The confrontation had turned violent.

She looked at his reflection in the bathroom mirror. He was holding an empty bottle in his hand. Cyanide can have an almost cherry-like odor.

Apparently, the speech pathologist hadn’t been worth the money. He went back for the shovel by the door. This weekend would be spent at his favorite oceanside motel—alone for the most part. 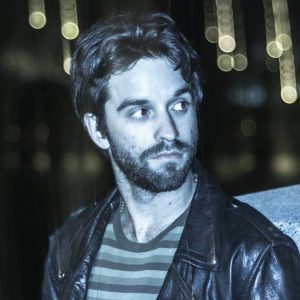 Duncan Ros lives in the Pacific Northwest where he works as a welder. His fiction has appeared in Shotgun Honey, Juked, Sanitarium, Fleas on the Dog, and The Dark City.