A man dusts himself off and backs away from the mess he’s made. He asks himself why it’s so easy, the act and, to a lesser extent, the abandonment of the act. Already the act seems like a dream. The retreat from it seems like a resurfacing or a resurrection.

He looks down, scanning himself quickly, looking for something he’d never be able to explain away.

The moments that follow the act, the few minutes he spends merely breathing, were usually tainted with confusion, a haze he had to wade through. It was almost like a lazy high, a kind of easy doubt taking over his mind. A recalibration was needed. A reset. Managing his breath helped. One breath then another. Enjoying the moment, when all there was to do was breathe.

He looks up at the moon, fat and urgent and white. Veins of red across its face. For a minute or two he speculates on the truth of the color. He had learned not to trust the supposition of the color of red. Colorblindness was the issue. Specifically red. He never trusted red. Always knew that it could in reality be brown. Blood even looked brown to him, even when he was right on top of it. Even under the brilliant glare of the moon that hung above him on that night, the color of blood was questionable.

One breath then another…

He feels old but not in a bad way. Not achy and frail though. Used up would be more accurate. Experienced with some depth to him. Old enough to know better though. This has gone on way too long, he tells himself. But he’s so good at it. Practically the only thing he’s ever been good at. The only moments in his life when he knows exactly what to do. More importantly, what not to do. But, still…somehow he thought things would be different by now.

Often he wondered what it would take for him to change, to abandon his field of expertise. It’d take a huge shock to the system. Something huge and heavy that he couldn’t get out from under. Something like his world falling in around him. Everybody thinks they can reinvent themselves, that they have the capacity to bring forth great changes in their lives. One day they’ll change from shapeless to shaped, undefined to definition. From time to time, he thought about making some changes. But when he got right down to it, when it got to the point where he’d have to draw a map that would lead him to those great changes, something inside told him that he’d never change. Not as long as the darkness could reach forward and overtake him so easily. Not as long as his heart collapsed so easily under the weight of its embrace.

He shrugs off the thought. It was best when he thought less. Things tended to settle within him. Instead he takes in the scene again and listens to his heart to see if it skips a beat. It doesn’t. It never does.

He knows he’s in trouble.

Walking down the path that leads to the parking lot, he’s surprised to find that his car is exactly where he’d left it. For some reason he was surprised. As if there were anybody around to disturb it. There was no one around, not for miles and miles. Just the rain. Just the moon. Just the animals. Animals, like him.

He gets in his car and drives toward home. He’s rather calm for the moment, considering what he’s done. But later, when he’s ready to put an end to his day, when he’s ready for a rest and all his memories, real or imagined, lay themselves on his shoulders, he’ll feel differently. It’s all part of the process. He knows that when he finally crawls into his bed, after a bit of whiskey, after he screams into his pillow until he coughs up blood, he’ll feel as though he were a white hot star, heavy and dense beneath the sheets. That’s when he’ll think about doing it again. Those are the moments when he is truly a dangerous thing. 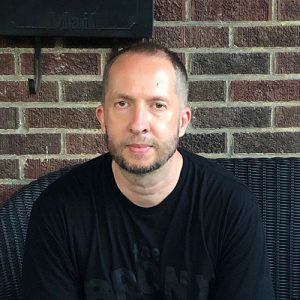 Nicholas Kish lives in Pittsburgh PA with his wife and three children. His work has appeared in publications such as Spinetingler, Molotov Cocktail and the Pittsburgh City Paper.