Paul Traeger had been told to leave the Galvins be whenever they were in the garage, so he was trying to move quickly and quietly. The meticulous neatness Charlie Traeger insisted on made him certain he’d find what he needed without bothering them. He knew he’d be in, out, and back to the house before his dad even noticed he’d gone. But the too bright room he entered reeked of something acrid, sharp as the music screaming from the Galvins’ truck. Overwhelmed, Paul froze, until Joe Galvin barked “shut that fucking door you dumbass piece of shit!” as he threw an oil-stained tarp over his work.

Paul turned and slammed the garage’s heavy steel door shut without thinking. His stomach knotted as it swung closed, cleaving him off from the outdoors.

Behind him the music lowered, and a calmer voice said, “Easy Joe, it’s just Charlie’s kid. Charlie need something, kid?”

Paul turned back to face Lonnie Galvin, standing calmly beside his dad’s red rolling tool chest. Lonnie was younger than Joe, and much less imposing. Joe’s hard stare felt like the source of all the heat in the room. Anger boiled off him, dwarfing even the lit torch gripped in his hand. His brother, in contrast, had a light, easy smile. When Paul’s first stab at answering his question came too softly to hear, Lonnie took the torch from his brother, extinguished it, and let Paul try again.

“I didn’t mean to bother you,” said Paul, his voice louder, but shaking. “I wanted to help, but he’s only got one spool of wire with him, and only one pair of shears…” His small fingers flexed and unflexed nervously at his sides as he spoke.

Lonnie flashed that mouth of crisp white teeth again. “See Joe? Things’re fine. Wait there, kid, I’ll find them.” He began rooting around in the chest, the drawers gliding open on ball-bearing rollers, and continued. “When you go back, just tell Charlie I peeked out to say we’re about done here, and that’s when you asked. It’s good of you to help him, I know he’s a busy man.”

After trying two more drawers Lonnie shrugged, and settled for giving over the shears he’d been using himself. He paused to wipe them clean, then examined them to be certain he’d missed nothing.

“Careful with those,” growled Joe. Paul glanced over, but the mean sneer on his face snapped him back to watching Lonnie. The bigger Galvin chuckled. “I know your dad keeps ’em real sharp.”
His words made it hard to keep his eyes off the tarp, or the wet floor beneath it.

The smaller Galvin found some wire in a lower drawer. He brought both to the frightened boy, walking carefully around the newly slick floor before crouching to Paul’s level, and looking him square in his eyes.

“Is Charlie making wreaths up there?” Lonnie asked through a grin.

It took Paul a moment to understand the question. Eventually, he nodded.

Paul almost shrugged, but said “no” instead. He hoped a clear ‘no’ would get him home faster.

Lonnie laughed. “Could you set one aside for us? We should bring one to Pine Grove before we leave, for our dad. He was a soldier too, you know.”

Lonnie held out the wire and the razor sharp shears.

Paul took them and began to step back, but Lonnie grabbed the boy’s wrists, holding Paul firmly in place.

“It’s been a long day, kid,” Lonnie said. “I’d like to get home. Tell Charlie I asked you to pick out a good one, that’ll be fresh for a few days past Memorial Day. Nothing more, or we’re going to have to stay here a while longer. Deal?”

Paul wheeled around hard. Behind him, the truck’s speakers drilled back up to ear-splitting level, drowning out Joe’s cruel laughter before the slamming metal door killed both terrible sounds.

Paul raced home, driven by the glance he’d gotten of a scared man bound to a gray folding chair, before Joe Galvin’s tarp fluttered down over the man and his red, ruined hands. 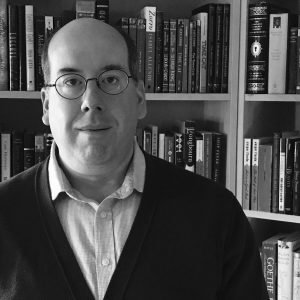 Mikel Strom is a librarian and writer living in Massachusetts with his wife and son. He can be found far too often at twitter.com/MikelS75.