The sun beat down on the hotel patio. A glass door was cracked open. Inside a man in a pinstripe suit sat on the edge of the bed, holding a telephone to his ear. Mary watched him talk, his mouth barely moving as it pressed near the pink handset, his other hand holding a faded cord in a tight grip.

A tall glass of cherry soda sat on the grated table, long pearls of condensation slipping down the sides in the afternoon heat. Mary clutched the cool glass in an attempt to chill her sweating palms.

John’s shoes slapped against cement as he moved to grip the back of his chair. Mary glanced at him, noting the sweat on his brow, inspired by the late July weather. He removed his outer jacket and draped it over his chair.

“I can do better,” Mary said, so quickly that the words came out a little jumbled. “I—”

John raised a hand, cutting her off. He sat, squinting. “You haven’t touched your drink.”

“I know that. It was an honest mistake.”

Other guests at the motel were enjoying a cool swim in the pool. A girl screamed before there was a splash. It raised the hair on the back of Mary’s neck. Laughter followed a moment later.

“I can do better,” Mary repeated.

John rubbed his forehead. “He’s talking it over. Said he’ll give another call. Seeing what needs to be done.”

Sweat trickled down the back of her neck. “Yes, but I—”

She took a sip. John rolled his eyes and yanked the glass from her grip. He downed half in one gulp before returning it to her open hands.

The phone rang inside, loud and sudden as a gunshot.

John headed back inside. “Stay here.”

Mary tried to read John’s body language as he picked the phone up, hand cupped around the end as if to protect his words from her. She concentrated on the phone; she could hear the ghost of it ringing.

“Come inside,” John said. “Close the door and curtains.”

She hurried to do as he asked, standing in the middle of the room, where she fiddled with the glass, ice cubes clinking against one another. “Did you tell him I’m real sorry?”

She perched on the edge of the second bed.

John said, “Someone will be by later to pick you up.”

“I’m under strict orders to keep you in this room.”

John leaned back on the bed. “Damn heat,” he muttered. He loosened his tie and laid with his hands on his stomach, closing his eyes. “Should only be a couple of hours before you get your answer. Relax while you can.”

Mary turned the glass around in her hands. Started thinking. About the glass. The chance to run. “I can do better.”

The glass shattered on the nightstand, soda fizzing underneath the phone, ice tumbling about the cord. John’s eyes flew open as he raised himself, too late.

Gripping the end of the glass, Mary turned the broken edge of it against him, plunging the sharp edges into the soft flesh of his neck. He gurgled, eyes bulging, and sunk his fingers into her shoulders, pulling her down.

They fell together, off the bed. John loomed over her, hands going for her neck as cherry soda spilled from his. She kneed him in the gut and struggled to push him off of her, panicked hands scratching at the ones around her neck. He squeezed and she choked before she managed to flip them, tearing herself away from his body. There was a wheezing noise as he reached for her, red soaking his body. He fell in on himself and lay still against the nightstand, soda bubbles fizzing as they spilled down the stand and onto his back, where they lay, still, together. 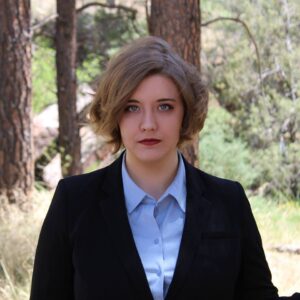 K. Anderson is a small town writer originally from Beulah, CO. Anderson enjoys a variety of homely hobbies such as baking, sewing, and other artistic avenues. Anderson is currently earning a BFA at Full Sail University and hopes to continue writing flash fiction in years to come.