Jake had never used anything that did the job nearly as well as the Japanese knife. A birthday present from a friend a couple years ago, it had soon become the only knife Jake used. It seemed to glide through the vegetables rather than chop them.

Using the knife made food preparation enjoyable, which was good, because since Jake lived alone now it would be easy to fall out of the habit of cooking and just heat up processed food.

Jake lived in a block of high flats in the Wyndford housing scheme. A lot of people were afraid to live there, but Jake liked it for its sense of community. Recently, though, it had been hard because of the lockdown in response to COVID-19. It wasn’t a lack of people to talk with — Jake had plenty of friends to text or video chat with — it was a lack of other people’s physical presence. You couldn’t even have a wee banter with a neighbour in the lift, now that the rule was only one person in the lift at a time. Same at Tesco, since everyone had to stand six feet apart.

So Jake was pleased to hear someone at the front door, first knocking, then rattling the letterbox, and then there was the scraping sound of something being shoved through the letterbox. Then the same sound again. And again.

Jake had been chopping an onion to put in an omelette, but now stopped and, knife in hand, went out to the hallway.

A man had stuck his hand through the letterbox as far as it would reach, almost to his elbow, and was now groping around, fingers wiggling, but not finding anything.

Jake remembered reading an article on Glasgow Live saying thieves had been pushing open letterboxes and grabbing car keys or any other valuables within reach. This guy must have been desperate to be trying it when everyone was supposed to be at home. Desperate, or just daft. But, either one, the guy was out of luck, because the wee table near the door wasn’t near enough for him to reach, and there was nothing on it but an empty shopping bag.

The hand kept twisting and turning. Jake waited till the inside of the wrist was facing upwards, then drew the knife across the wrist.

It would have been easier to grab the hand for leverage while cutting, but better to let the man think he’d cut himself on some sharp surface he couldn’t see. And the Japanese knife was so sharp, no leverage was needed.

At first, the man didn’t feel anything. It was only after his wound had gone from trickle to spray that he felt the wetness and pulled his hand back. Jake heard him crying, swearing, stumbling.

A look through the peephole showed the man pressing the lift button while his other hand was clamped around his wrist. He fell, but when the lift door slid open he was able to crawl inside, leaving a wet trail. Jake watched as the door slid shut.

Jake went back to the kitchen. She was washing the knife when her phone beeped. There was a text from her nephew. “Hiya, Auntie Jacqueline, I’m at Tesco. Do you need anything?”

She texted back, “No, thanks, I’ve got everything I need. Be careful out there!”

Jake melted butter in the pan, then tossed in the eggs and onion, put a lid on it, turned the heat down low. While the omelette cooked, she used a cloth to clean the blood off the laminate floor of the hallway.

Later, as she ate, she hoped the man hadn’t died. She’d enjoyed his company. 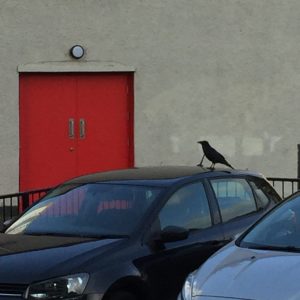 While authors need stories, stories don't need authors, or they shouldn't. Deek Brodie is a person in Glasgow, Scotland, who writes stories. This bio is itself a story, though a very short one, and it was of course also written by Deek Brodie. It could have been written many other ways, all of which would have been equally true, but none of which could be as true as the fiction that bears the author's name.