“You want me to kill her because she’s going to dress as Daenerys?” Sam felt like a damn fool. He should never have advertised for dirty work on Craigslist. But times were tough. Living in San Francisco wasn’t what it used to be. Even the Comic-Con had moved to Oakland. Nobody could afford the city these days, let alone a down-on-his-luck thug.

His client, who went by the name of Doctor Diva, wore a skimpy Catholic schoolgirl outfit, the button-up shirt tied Daisy Duke-style (not that Diva would know the reference) above her navel. North of that he saw two buttons, with only one in use. Fake boobs, golden and curvy, spilled out at the top. She wore an obvious platinum blonde wig with a red bow on top. Sam figured she was trying to look like an Anime character of some sort, but he had no idea who. His cartoon watching days ended with He-Man.

The dude in him had no complaints about Diva’s sexed-up appearance. The dad in him? Not so thrilled by her fashion choices. Let alone her homicidal instincts. Diva couldn’t have been more than a few years older than his own kid.

“Affirmative’s the biggest bitch,” Diva said. “She’s only in the cosplay business because she couldn’t hack it as an actress. She’s not legit like me.” Her rage stemmed from an overheard conversation, in which another cosplayer named Affirmative Solo shared her plans to dress as the Queen of Dragons for tomorrow night’s fashion show. Diva had the same outfit in mind. Cue the murderous rage.

Sam looked across the quad. People dressed as Pokémon and kinky, half-naked Disney characters populated his line of sight. There was no mistaking the actress turned cosplayer with her flowing black Elvira gown, jet black hair and ample chest. The professional banner over her booth helped. A horde of eager boys waited in line to get her autograph. Diva had no line, Sam noticed.

He did dirty work, sure, but murdering a young woman for being successful wasn’t in his bag of tricks, not that he’d turn down the money. He told Diva he’d put a slug in Solo’s brain when she went to her room for the night, but the two grand had to be wired first.

Sam tossed out his usual warning. “You do it, there’s no turning back. I’m not kidding, little girl.”

Diva fiddled with her phone. Her hands shook like she had palsy and her face turned sheet white, but the little psycho got it done.

Sam didn’t let her finish. He knew the transfer was untraceable and immediate. “Nope. I’m a freight train now.”

Diva scampered off, looking ill. Sam loitered around the booths, navigating a sea of foam weaponry and skin-tight costumes. He’d catch Solo alone, get her to leave the Con, but not kill her. Diva would be the only Daenerys, the darling of the fashion show like she wanted, and nobody’d get a coffin. Sam would give half the kill money back and call the matter handled.

Two ambulances howled to a stop when he walked outside. Costumed geeks crowded the sidewalk at the 10th Street exit. Sam went up to a sobbing Ronald McDonald version of Thor and asked what happened.

“Some chick jumped off the damn roof!” The clown god cried.

The herd parted to let in the medics, giving Sam a glimpse of the jumper. Dark blood pooled on the asphalt, outlining the pile of mashed potatoes that used to be Diva. There was no mistaking those golden breasts and that schoolgirl outfit. Her blonde wig lay a few feet away.  Her real hair was brown, like Sam’s own daughter back in the city. The little psycho had a bit of a conscience after all, only her moral compass was for shit. Sam wondered if that was enough to get her into Heaven. Her two grand would keep him in the city for another month, now that he didn’t have to refund a dime, so that might grease the pearly gates for her. 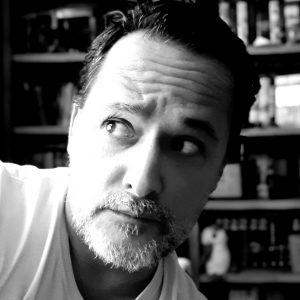 Patrick Whitehurst writes from Tucson, Arizona, usually with a chihuahua in his lap. He's the author of four nonfiction books for Arcadia Publishing and the novellas “Monterey Noir” and “Monterey Pulp.” His short stories have appeared recently on the Shotgun Honey website, in the anthology “Shotgun Honey Presents: Recoil,” and in Switchblade Magazine.