I don’t see the dog till I clip it with my bumper and flip it into the scrub.

“Fuck!” I stomp the brake and fishtail into the shoulder, my heart a knocking bass line.

Peering back through the dust cloud, I search for movement, but there’s none. No houses on this stretch, just the DollarMart, closed till nine, and the overpass where the dopers and tweakers camp. Half mile down is the QuikFill, where I’m already late for work because my body hates the early shift and leaving Angel behind in bed.

No one on the road. So, probably a coyote, but still. Fuck.

I’m making coffee in the big urn when a rough-looking regular comes in. Usually, it’s a dollar on pump four dispensed into a red plastic jug—for what, huffing, maybe. Today, no gas, but he tongs a chocolate donut with sprinkles out of the case, drops it on a napkin, and leaves a wadded dollar by the register. Coffee’s about ready on the tip of my tongue, when he pulls a knife and shows it to me. Not a box-cutter; a knife you’d steak-out an elk with.

“What the shit?” I say at the same time he says, “Gimme the gun.” A voice like flat tires on a fire road.

I put down the carafe and go behind the counter where I keep a little Ruger .22 for emergencies. Five seconds ago it became obsolete when we both learned I’m no hero. He motions for it, and I hand it over.

“Take anything you want, man,” I say, wondering if he’ll let me at least write Angel a goodbye before he puts a bullet in my face. But he drops the gun into his pocket and takes the donut to go. I stand there, deciding: call the cops and report my gun—took off Angel’s brother in a card game—stolen, or just wonder if it’s my piece every time there’s a crackhead 211 in town?

A single gunshot outside drops me to my knees. There’s a howling sob, like a shot man might make. Next, shattering glass, like a rock through a car window. Being that my car is the only one in the lot, I jump the counter, press my face to the glass behind the Doral window cling, and see he’s sitting on the curb, hunched over something like a sack of laundry.

I run out, reckless mad, thinking if he was gonna shoot me he would’ve already. “My fucking window!” I circle around front of him, safety glass crunching under my heels with a sound like someone chewing ice. Guess who’s gonna clean all this up? Me. Insult to injury.

He looks up with a face crumpled and set like bootprints in dried mud.

I don’t see the gun anywhere, but I do see what he’s holding isn’t laundry at all. A dusty brown dog, rear legs bent wrong, like broken, like from being hit with a car. I don’t want to see, but I do, the little dark hole high on the back of its head, between the ears. I see its gray muzzle and its tongue hanging out, little bit of blood on it. The thing I wish I didn’t see, will not stop seeing, is the yellow sprinkles from its last meal of Dot’s donut stuck to its pink-black gums.

Guy gets up with the dog in his arms, doesn’t say a word, and shuffles off down the road, back to the overpass or wherever. It’s like there’s a fist in my chest, squeezing something vital. I want to yell after them, I’m sorry! But I can’t.

So, I go inside for the broom and dustpan from the janitor’s closet, wondering how long before he’s back, using my piece to get free beer for life, or revenge. I broom up a pile of glass, dump it in the trash. Open my car door next to brush glass off the cigarette-burned seat, and there’s the Ruger on the floor mat, where it landed. 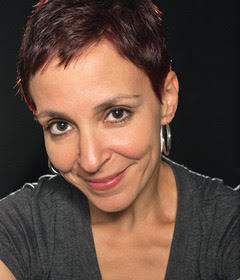 Sandy Smith holds an MFA in Creative Writing from UC Riverside and works as a freelance editor and writing instructor. Her work has appeared, or is forthcoming, in Ellery Queen’s Mystery Magazine, The Offbeat, Sky Island Journal, and Cleaver. She lives in Las Vegas with her family. On Twitter at @sandysmithwrites.