Two elderly women approach the register. The place smells of oil and sugar and burned coffee. A stain from a spilled drink stretches out from under one of the orange plastic-covered booth tables. A community college student in a ballcap and sweatshirt and emerging beard studies from a biology textbook at a swivel chair facing the window. He looks out to see a pick-up truck, a brown Toyota, pull up to a spot, the afternoon sun gleaming off a corner of its dented bumper.

The teenaged girl at the register in a Donutland cap, alone on her shift, says they are out of crullers. The women settle on dark-cherry flavored donuts, which are colored bright pink. They bring their donuts and coffee to one of the booths and chat. The driver of the pick-up gets out. The community college student leaves his investigation of the Krebs’ cycle to see the driver’s face shadowed by the hood of his green sweatshirt.

The driver pulls the hood to reveal his ski mask as he enters and sets off the door chimes. He points his gun, a chambered pistol, at the teenaged girl. She holds up her hands, then brings them down to empty all the cash into a waxed-paper bag intended for donuts. As she hands the bag over, the two elderly women are on the floor, hands over their heads, and the glasses of one of the women have landed on the tile floor and one of the lenses is cracked. The community college student is also on the floor. He asks, “You okay, ma’am?” The man in the ski mask says, “Shut up. Stay down.”

The teenaged girl’s mother once used a pistol to scare away her father. He never came back. She presses the button for the police.

A squad car arrives. The would-be burglar turns to leave. He turns back to the counter. The teenaged girl stands with her hands over her head. He fires the pistol, putting a large hole into the plastic slots displaying soft drink prices. The girl yells. She ducks. The police then run in and jump the man and disarm him. On his way down he fires another shot hitting the community college student in the calf.

The student misses his biology test. His classmates send flowers and balloons. A few meet him at the hospital with a white frosted cake. He is a hero in Cedar Rapids. The incident becomes a story of how he called the police when it was the girl at the register who had pushed the button. The warped truth of the incident dismays the biology instructor at the community college, along with the hassle of rescheduling the test for the student, who never takes it. The instructor heard it firsthand—he didn’t do anything but be polite to the elderly women and sustain a gunshot wound. The instructor passes the student out of exasperation.

The teenaged girl takes classes from the same teacher before doing pre-med at the University of Iowa. She continues working at the Donutland. Another job—McDonalds, KFC—would be as risky. When the chimes ring her pulse quickens. She feels light-headed. She presses the button. The police stop coming.

Another burglary happens at the Donutland the year the Donutland is to close. There is barely any money in the register this time, but the burglars succeed, and the girl is elsewhere. She is now a young woman and is graduating from the University of Iowa.

The woman gets her medical degree from Columbia and works in an emergency room in Queens, New York. Her first night on the job she treats a young man with a gunshot wound in his thigh. She removes the shell with pincers and drops it into a dish, a little dull metal piece with flecks of blood. She still balks when she hears door chimes. She has even disabled the doorbell on her apartment building door. It’s difficult for friends and her aunt who lives nearby to get into her place to visit her. The pain of the victim is familiar. The gunshot wound is also hers 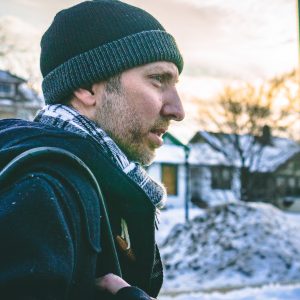 Joshua Wetjen is a high school English teacher living in Minneapolis and working in St. Paul. When not grading or chasing his two children, he likes to tinker on his jazz guitar and try new restaurants with his wife. His work has appeared Opossum, Newfound, Yalobusha Review and other publications.