Whenever Denny called it was important.  These days the only time my phone rang is when shit hit the fan and it’s gotten to a point where I’d prefer telemarketers.  Denny though? I’m always going to pick up. We went to kindergarten together and I got a spot for him.  He talked quickly and I half listened.  While he outlined his problem, I read a magazine about muscle cars with tattooed broads on every page.  I didn’t know shit about cars, but I was trying to learn. The women helped.

“So, what do you think?” Denny asked.

“Repeat yourself.  Couldn’t hear ya,” I lied.

Denny isn’t married and he never will be.  He’s the kinda guy who after staring at a chair too long might find it fuckable.  Nothing is off limits. He described a variation of the same problem he always had.  Denny had a few too many by himself at home and decided to go out. Sure enough when morning came, he wasn’t alone in his bed.  I was happy for him right up until he shared who it was.

“Hopefully just his wife?” I asked.

The silence meant it was Meg, Billy Roth’s little girl.  I mean she wasn’t that little, in her thirties, and a dime but that didn’t matter.  Billy Roth was connected in every state house from here to DC. Word is Meg Roth is already some huge political operative without a lick of actual experience to her name.  Easy when your Dad is the longest serving leader in any state legislature in the history of the United States.

“He’ll kill me Luke.  You’ve heard the stories.  Broken legs, pulled fingernails, hits.  He does anything he wants,” Denny said.  He was right.

“Alright, come over and we’ll head up north to the cabin and lie low for a bit.  I’m sure Roth will get bored; the man has a lot goin on.” I heard a sigh of relief from Denny, he’d be fine.  I had his back like old times.

The thing is though, Roth hated Denny.  Always has. Some football shit when they were in high school.  The thought of the town vagrant with his daughter would not be something that Roth would soon forget and the history between them only made it worse.

Denny was over in a flash and we got the hell out of there.  I tried to keep him calm, keep the ride upbeat like one of our old road trips.  Waits in the CD player and a pack of cigarettes in between us trading stories about the time we played cards in Windsor.  We were in Detroit for reasons neither of us could recall and then ended up in some motel in Canada without any money left over.

“I think I told you this was the opportunity of a lifetime,” I said.  Denny laughed.

I checked the phone between my legs like I was waiting for something.  I was. Denny wasn’t an idiot and his comfort was waning a bit. The sirens were up on us in no time and the tailgating seemed like overkill.  Denny gave me a what the fuck look and I did my best to look surprised.

“Shit this is not good.  What the hell is going on,” he said.  He asked the question even though I was pretty sure he knew the answer.

I love Denny, I really do, but I’ll die for no man.  I did say I was sorry as some Roth goombah dressed as a cop pulled him out of the car and stunned him, so it looked like he was going willingly.  It was all so professional that I was sure Denny wasn’t the first person to get this treatment and he sure as hell wouldn’t be the last.  I went on driving, staying the course to the cabin and saw on my phone that the money from Roth came through.  It was hard not to get excited at the open road. 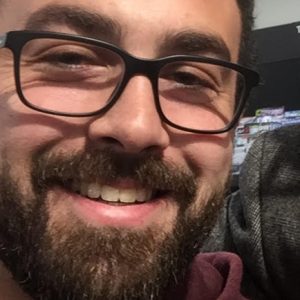 Mike Freveletti lives in the West Suburbs of Chicago, Illinois, working as a consultant in commercial insurance but most importantly writing as much as he can in between that. His fiction and poetry have appeared online and in-print in places like Kind of a Hurricane Press, Snapdragon Journal and forthcoming from Gyroscope Review.  His interest in noir fiction started with David Goodis and continues on daily through books, comics and movies.