Miranda Lake listened to the chatter in the break room. It was late and the 3rd shift was gathered in the correctional officer’s lounge shooting pool and drinking coffee. The conversation turned to the death of a high-profile inmate housed at their sister prison, MCC New York.

At MCC Chicago, guards wondered; could you murder someone locked in segregation at a federal prison?

“It can’t be done.” Gaura set down his coffee and lifted his cue.

Lake reached for a cue, joining the game. “I say it can, and it did.”

She tapped a ball into the corner pocket. The handcuffs, hanging from her waist, banged the table. “I started in custody. I’ve been in these walls too long.  I know what can and can’t be done. It can.”

Lake reflected, “The midnight crew is typically a newbie crew. They don’t know any better, so they do what the Lieutenant tells them. He sends a few people out on perimeter watch, or out to get burgers. It keeps them busy for the right amount of time to do it.”

“Do what?” Everyone’s head turned to Officer Jones, who strolled in, gripping an energy drink.

“Kill him.” Lake replied, leaning in. “Strangle him and make it look like a suicide.” She persisted, “Custody can be bought.  I’ve seen it with guards here. A Hack one day, an inmate the next. It’s a horrible job and they don’t pay you enough.” She lifted her chin, “The pictures were released. Three broken bones in the neck are unheard of with suicide. They must have used wire.”

“Really?” She shrugged. “Things go wrong with cameras all the time. I just want them to be caught,” She said fiercely. “I want that entire bribery scheme exposed. There had to be a lot of money involved for a locked-door murder, and those women deserve justice.”

“Who’s in on it?” Patterson grilled.

Her eyes narrowed. “Your Control person—because they’re gonna run that secure elevator carrying the Lieutenant and his Assistant directly to SEG and hold the elevator there. The Security Specialist, because they are making sure the camera footage doesn’t exist.” She paused. “Takes two gorillas and two minutes. They do it and leave him for someone else to find. Everybody gets paid. The Warden gets a nice job transfer to the Regional Office as punishment, and a few heads roll. The officers that actually went out for burgers can’t say they left the building, so they say they were sleeping on the job. Those poor dopes get cut from the roster.”

“They did forge the log book.” Patterson’s eyes widened.

“What do you mean, Lake?” Warden King’s shadow filled the doorway forcing the group to their feet. Coffee cups banged into trash cans.

Lake turned to face him and nodded, “Warden.”

King looked over the group. “I’m hearing you tell the others your speculation of how an inmate was murdered up in New York.” He strolled toward the vending machine.

“Yes sir—well I heard the others talking and I was just offering my opinion.” Lake gripped the cue, feeling the Warden’s long-standing contempt for her. Moving her to R&D after she wrote the memo exposing Captain Carter, but, unable to link King to the crime.

“I believe, Lake, you should keep these thoughts to yourself. I won’t have you badmouthing the fine officers up there in New York.” He turned to the group. “If you are going to be loyal to your position, then I suggest you keep speculation to yourself.  I won’t have my officers joining the bandwagon of suspicion.”

He turned to Lake, “Why don’t you take a stroll down to the basement with me while the rest of your coworkers get to their posts?”

Lake turned away, sliding her handcuffs into her front pocket and the key under her tongue; then slowly walked out of the room to find the Warden and his assistant waiting for her. 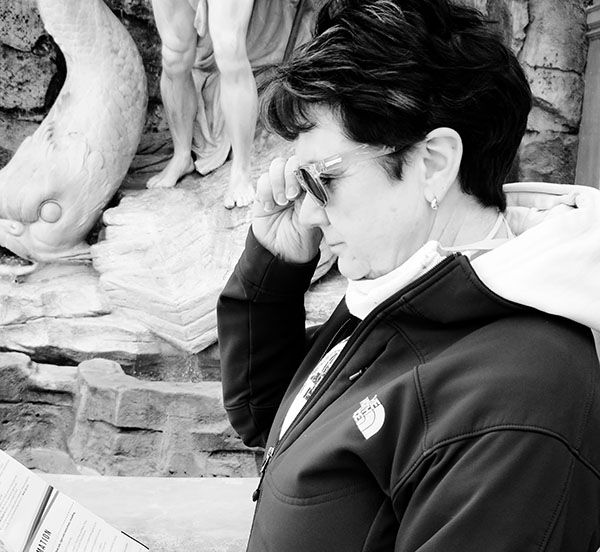 N.J. Lucas is excited to have her first piece of crime fiction published in Shotgun Honey. She often uses her unique occupations and experiences as inspiration for her writing. She finds stories in the funny, frantic and complex situations of life. Nancy is a member of SinC, RWA and some crazy-supportive writing groups. She can be found pouring herself a shot of organic, house made Limoncello the minute she discovers the long arm of the law has collared a criminal and justice is being served.