I Never Meant to Start a Murder Cult

I never meant to start a murder cult.

It’s not something I woke up one morning and decided to do. But after I was convicted of all those murders, I started to get fan letters in prison. People admiring me, praising me for being so “visionary” and “courageous.” Praising me for being the only woman on death row in my state. For being a ground-breaking feminist in a field – serial killing – that has so few women. Then they started visiting me. Confessing to me, telling me about murders they’d committed themselves. Looking at me through the plate glass window of the prison visitor booth, searching for some sign of approval. Looking for a connection. I would smile and nod my head, listening intently. And without me doing anything other than smiling and nodding, their numbers grew.

Eventually those numbers included one of the correctional officers at the prison. After months of careful planning, she was able to help me escape. In the prison laundry truck, of all things. It’s such a cliché that no one actually stopped to check the laundry. They do now, of course. But not then. And she still has her job. No one at the prison ever discovered her role in my escape.

They holed me up here in this cabin, hidden away in the woods, if you can call such a large house a cabin. My followers take care of all my needs, and I’m free to pursue my painting and my writing. Some days I go on long hikes in the woods, and some days I just lounge in the library here and read. My artwork sells very handsomely to an underground network of collectors, so I have a steady stream of income. Off the books, of course. Just like this cabin is way off the grid.

Don’t bother struggling. Those ropes are secure. You’re not going anywhere. My follower who tied you to that chair was a Merchant Marine, so he knows his ropes. My disciples are nothing if not thorough. One of them even got a job at your newspaper just to keep an eye on you and your work. That’s how we knew what you were planning to publish. All that research has been destroyed by now. Your computer was thoroughly burned to a crisp, and your backup files in the cloud have been deleted.

I’ll give you this: you’re a damn good journalist and investigator. Too good. Uncovering the DNA evidence on my early convictions took a lot of hard work. But I can’t let you publish that. If my conviction is overturned on those early murders, it might lead to questions about the other murders they pinned on me, and that might lead to the public knowing my secret. And that would destroy the mystique that has built up around me. I would no longer be a living legend. My disciples would leave me. And I really like the life I lead, with followers attending to my every need and my every desire.

You see, all that info you uncovered about my early murders was absolutely correct. I was wrongly convicted of those murders. I was completely innocent. In fact – and this is my deep dark secret – I’m innocent of all the murders I was convicted for. I’ve never killed anyone in my life.

Until now. Stop squirming. You’re gonna be my first. 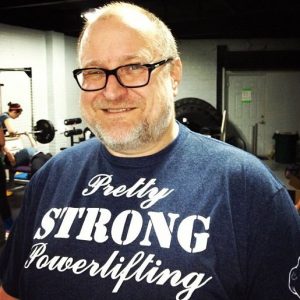 Darrell Z. Grizzle is a former parole officer who now works as a counselor in private practice. He lives with two cats in a house-in-the-woods in Marietta, Georgia. His horror and crime fiction has been published in Shotgun Honey, Near to the Knuckle, Story & Grit, Eldritch Tales, Mad Scientist Journal, and Daily Science Fiction. His home on the web is www.ShadowHaunted.com.