The diner is nearly empty, as Lucy hoped, and she watches Elena walk through the door. Elena chatters about the youth soccer league they both volunteer to run, Elena as president and Lucy as treasurer, but Lucy barely listens.

“Did you bring the new debit card?” Elena asks. Lucy sets down her cup a little too quickly. “Remember,” Elena adds, “you said it’s being replaced?” Lucy wipes the splattered coffee with a napkin. At least her hand doesn’t shake.

It started when Lucy’s car broke down. She couldn’t afford a new transmission. But her nine-year-old daughter, Sophia, had already experienced too much instability since the divorce. Lucy borrowed $3,000 from the soccer league’s account, intending to repay it from her next paycheck. But on payday she couldn’t cover the whole $3,000, so she held off repaying anything.

Elena is watching her across the table. “No,” Lucy says. “I haven’t received the new debit cards yet.”

“Really? Can you call the bank? I still need to order new nets. And more soccer balls, too.”

After the car repair, nobody noticed the missing $3,000. When Lucy went to Target for team snacks, a few housewares barely increased the league’s expense. The next week, Lucy brought the league checkbook to Macy’s. Later, she upgraded her old cellphone. Paid off her credit cards. And she’d always wanted to shop the luxury brands at Neiman Marcus.

Two weeks ago, when Elena called to say Amazon declined the league’s debit card, Lucy almost passed out. She had no idea how much she’d spent. Since then, she’s stayed awake nights scrutinizing account balances and scrolling online job boards. She’s yelled at Sophia, guzzled antacids, and lost sales at work. She can’t keep living like this.

Elena’s eyes narrow in confusion. “But your treasurer’s report showed a $25,000 surplus.”

“I… borrowed money from the league.”

“I’m so sorry. I’ll repay it all. I just need more time.” Lucy’s heart pounds and her pitch rises. “Can you help me? Please. I can’t go to jail. I can’t lose custody of Sophia.” Lucy sobs into her hands.

After a long pause, Elena says, “Okay. We can fix this.”

“Everyone makes mistakes. You’re a good person, and times are hard. For me, too. We want our kids to have better things. And those moms in designer clothes add insult to injury. Did you see Stephanie’s Louboutin shoes? I can’t afford anything like that, either.”

Lucy sags in relief and wipes her eyes.

“But we can’t let any hint of this get out,” Elena says. “The soccer league won’t survive if the families think their dues are at risk.”

“Here’s what we’ll do,” Elena says. “You’ll resign as treasurer immediately and start repaying the league. I’ll serve as interim treasurer until you’re done. Nobody else will check the books. How fast can you repay the money?”

“You’re right.” Lucy considers. If she adds a full eight-hour workday on Saturdays, her salary and commissions will add up quickly. Lucy cringes at the prospect of asking friends to babysit, losing Saturdays with Sophia, and missing her soccer games. But it’s the only way to fix her mistake. Consigning her misguided purchases will help too. “I can pay $500 per week,” Lucy says, “$2,000 a month.”

“That should work. Five hundred in cash. No one else will know.”

“But you need to keep up with the payments. Otherwise, I’ll have no choice but to report this.”

And that’s what Lucy does. Her extended workweeks are grueling, but after six exhausting months, her payments are halfway done. She’s grateful her secret is safe and her life intact. At the league’s end-of-season party, Lucy mingles with the other guests. That’s when Elena sweeps into the room. Her dress is stunning, her red-soled Louboutins unmistakable. Elena raises her wineglass, meets Lucy’s gaze, and smiles. 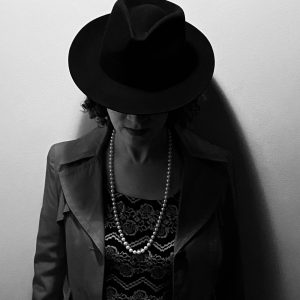 DK Snyder lives in Virginia and writes by night about what hides beneath the mundane. Her work appears or is forthcoming in Cease, Cows; Punk Noir Magazine; 50-Word Stories; and elsewhere. Find her on Twitter @millioncandles.