It’s for the Best

Promiscuous, that’s what the mayor has become. Power has unzipped his trousers. Libido has planted his love-stalk into too many pots. This morning he told me he’s running for re-election. A third term. Winning will doom him even more than he’s already doomed. I can’t let that happen.

One suicide. Two abortions. Four exploded marriages. That’s what I suspect. Who knows what else? Probably even the mayor doesn’t know. Or care.

Maybe I can’t fix the mayhem his lusty shenanigans have unleashed among the young women in our town, but right now I can certainly fix him a sandwich for lunch.

He looks up from his phone. The blue eyes I once kissed now glitter harsh as fluorescent light. The high cheekbones I once stroked are flushed red as a rash. The full lips that once said he loved me more than God now get licked by a fat wet tongue, betraying that he’s looking on his phone at an X-rated video of his latest sweet young thing, legal, I’m sure, but barely.

“Absotively!” I reply. I know all his likes and dislikes. Nobody knows him better than I.

He fired an assistant for serving him a sandwich with seeded rye. Understandable. He’s allergic to caraway seeds, as am I. One of many traits we share.

I hand him a Coors Lite. “I’ll join you with a chardonnay,” I say. He rewards me with a dimpled smile. How I once loved those dimples.

I assemble two sandwiches—samwiches, he used to charmingly call them. I layer the meat with sliced tomatoes and iceberg lettuce (the only lettuce he’ll eat). Finally, I spread a thick layer of mayonnaise, but just on one slice of bread. The mayor loves his mayo. I love mayo, too, but today, I can’t put any on my sandwich.

I place our plates on the table. We chat about this and that. We both love rewatching Game of Thrones, and we discuss our favorite episodes. I especially love the skullduggery. He especially loves the brothel and rape scenes, though he’s polite enough not to say that to me of all people.

“Cersei is such a badass,” I say. “But she does love her children, and she always acts in their best interests, regardless the cost. I so admire her for that.”

Cersei is my favorite Game of Thrones character.

“After lunch,” he suggests, “let’s watch the Walk of Shame episode.” He again dimples his beautiful smile.

The Walk of Shame episode is where Cersei is forced to walk naked through the city. Full frontal nudity. It’s my least favorite Cersei scene. It triggered nightmares, but instead of naked Cersei being jeered and spat upon, in my nightmares, it’s me.

I nod, blink back tears. That won’t happen.

He finishes his sandwich, belches to make me smile. He’s always had the funniest belches. He swallows the last of his beer.

I wait and watch. A frown pinches his beautiful brows. He rubs his stomach. Groans.

“I’ll always love you, my darling,” I murmur.

Dismay puckers his mouth. Then pain and betrayal twist his face into a gargoyle’s mask.

He chokes out one word—“Mama!”— before the poisoned mayonnaise topples him, lifeless, to the floor I stroke his beautiful face. “I’m sorry, my beloved son. It’s for the best.” 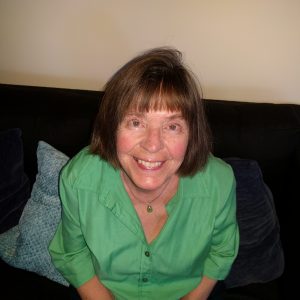 Marie Anderson is a Chicago area married mother of three millennials. She is the founder and facilitator of her local public library’s writing critique group, going strong since 2009. Her stories have appeared in over 50 publications, including The Saturday Evening Post, Lamplight, and Woman’s World. In 2021, After Dinner Conversation published her story, “Metaphors,” as a standalone on Kindle, and that story still occasionally cracks the top ten in three Free Amazon-Kindle Categories.