I’d finally decided my mother didn’t love me the day she let those guys kick the crap out of me. We didn’t speak about it afterward, but as I lied in a tub of ice that night, I imagined how our conversation could have gone. Her excuse would have been dismissive, complimentary, and self-congratulating. Something like, “I’d spent twenty-one years raising my daughter to be tough enough to help me out of sticky situations. This plan wouldn’t have gone through without you, sweetie.”

Splayed out over the concrete with blood pouring from my broken nose, I could have asked the question I’d often considered in moments like these: “Did you ever love me?”

She wouldn’t have answered such a sappy question. She would have given me the smile a scar warped into a smirk, but even in my imagination I couldn’t make her say the words.

I’d changed into dry clothes and settled on the bed’s greasy comforter hours before she returned to our motel room. She told me to be ready to leave in ten and tossed something at me I couldn’t catch—a small container of pills that pattered onto the pillow and slid down to settle against my shoulder. I didn’t ask whether she bought them or mugged the drug dealer, but ten minutes later she had me hotwiring a car in the parking lot while she went to get a bottle of hair dye from the convenience store next door.

I watched through the window as her bleach blonde head disappeared around some shelves, and behind my eyes danced the bottles of yesteryear, the dusky reds and midnight blacks and golden honeys and deep chestnuts, and the bottles of those yet to come, of schemes yet to be planned in the same slapdash way she applied dye to her hair.

And so I took the car. I took the painkillers. I took the fifty grand I had the crap kicked out of me for. And I left my mother to flee on foot with Purely Natural Auburn Color Crème.

I shouldn’t be surprised, I guess, that when she found me, she shot me and took back the fifty grand.

But she didn’t shoot me anywhere fatal.

So maybe she does love me. 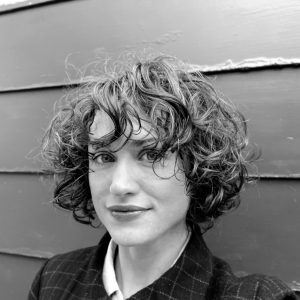 Leigh Ramsay lives in Wyoming where she spends her free time writing genre-bending fiction with a healthy dose of dry humor. She tries and fails to be active on Twitter @RamsayWrites