Looking down on her former boyfriend lying face up in the middle of the road, Ella May Pride was thinking about her daddy and the men that would come for him, probably tonight, all because Matt Talley saw Brett Favre in the back corner of the endzone. Like he’d seen Jesus or something.

That’s basically what he’d told her on the drive over, Matt sitting in the backseat with his knees scrunched up, hugging himself as he said, “I don’t care what you think, Ella May. It was worth it. You know what Mr. Favre said to me? Mississippi Blue 42.” Sounded to Ella May like something Favre would’ve said before he sent those dick pics to that cheerleader and came back from retirement one too many times, or maybe the old gunslinger was just drunk. The way Matt kept whispering it, under his breath, after every single tequila shot—“Mississippi Blue 42”—Ella May knew what she had to do.

Her daddy knew it too. That’s why he’d flashed his Ford truck’s high beams right before Ella May followed Matt into The Bear Trap. Eddie didn’t say anything to his daughter when she walked up to his driver-side window. Just handed her the red bag, a look in his eyes Ella May had never seen before.

By the time Ella May took Matt up to the college bar’s second-story loft to have a talk with UCM’s star running back, Cergile Blanc, her boyfriend was loaded. Barely able to make it up the steps. Marcus McCloud was up there, too, looking at her all googly-eyed, the same way he always looked at her after that one night at the Hampton Inn.

Cerge told Marcus he had to talk business and took the couple up to the roof, leaving the backup QB behind. Soon as they got up there, Cerge snatched the gym bag off Ella May’s arm, just like she wanted him to, waving it in his quarterback’s face, shouting, “You trying to fuck me out my money, Mathew?”

All those tequila shots on an empty stomach, Matt was white-girl wasted, swaying around, unable to answer Cerge’s question. A breeze picked up from the west and blew back Matt’s frat-boy hairdo. Ella May was staring at her boyfriend’s freakishly white forehead, guessing it had something to do with his bangs, or maybe his helmet, when Cerge threw the gym bag off The Bear Trap’s roof.

Matt stumbled over close to the ledge, rising up on his tiptoes as hundred dollar bills floated through the night. Ella May stayed back, watching him, remembering the sad look in her daddy’s eyes. She gave Cerge a second or two, hoping maybe he’d man up and do the heavy lifting for her.

Cerge said, “You got something to say to me, girl?”

Ella May didn’t say anything. She just stepped forward and pushed Matt off the roof. He was so tall, she had to put her hands on his ass, one under each cheek, and use her legs to get him going.

And then it was over, at least that part of it. Ella May could feel Cerge still standing beside her, craning his neck and pointing down at the street as he said, “You pushed his ass off the roof.”

Two blocks away a siren wailed.

“You pushed his ass off the—”

Before Cerge could say that same line again, Ella May turned and started scrambling for the stairwell door, feeling the wild rush a quarterback must get when a blitz is on and he takes off for his life, imagining the way Matt must have felt when he saw Brett Favre standing in the back of that end zone with the game—and all her daddy’s money—on the line.

Ella May blinked and she was down the steps, realizing she’d forgotten all about Matt’s backup, Marcus McCloud. She could see him through the cloudy window in the stairwell door. She could hear Cerge shouting something in Haitian Creole behind her. Pushing the door open, running for Marcus, tears in her eyes, Ella May didn’t say a word to her former boyfriend’s replacement. She didn’t have to. 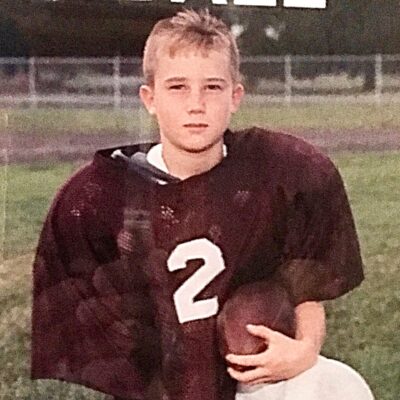 Eli Cranor played quarterback at every level: peewee to professional, and then coached high school football for five years. These days, he's traded in the pigskin for a laptop, writing from Arkansas where he lives with his wife and kids. Eli's novel Don't Know Tough was awarded the Peter Lovesey First Crime Novel Contest and will be published by Soho Press in 2022. Over the course of his career, Eli's fiction has garnered multiple awards (2018-The Missouri Review; 2017-Greensboro Review). He recently wrote a series of football-themed essays for the Oxford American. Eli's sports column, "Athletic Support" appears weekly in newspapers across the country. He is currently at work on his next novel.