Saturday afternoon at the museum and you couldn’t breathe for the crowds and of course everyone and their kids had to pee at the same time. Amy would have murdered all of them but Eve for five minutes of real peace and privacy, but a locked stall in a swarming restroom was the best she could get. She yanked up her skirt and sat on the toilet. She would pretend she was going for real.

Amy hunted through her skirt pocket. She didn’t do this often. Kids were running through the bathroom, even crawling, while their helpless moms were trapped in the stalls. Amy could feel their anxiety pushing against her own stall. All she needed, on top of the weariness and headache.

She had the bag out. She scanned under the stalls. Just feet. She leaned forward, tried to pull her skirt wide across her thighs, a safety net in case of a fumble or a rip.

Couldn’t she have 60 seconds? “Did you wash your hands?” Amy called out.

Amy got out the stamp-sized baggy and her keys. Easy. She put the key in her mouth to free both hands; disgusting but necessary. You had to be careful with the baggy, with any container that small. Using the both thumbs and both forefingers, she gripped the tiny Ziploc lining in the tiny baggy, just the right size for Barbie’s sandwich. Ready? O.K., it was open, no problem, fucking worrywart, she was too tired to think, not too tired to make her fingers work. Now, baggy in one hand, key in the other, dip key into baggie, dig some up, whoa, more than she meant, fuck it. First the right nostril.

A banging on the stall. Eve!

“Mom! Come on.” The banging stopped.

“Almost done!” Amy added a cheery extra syllable to the last word, as much for the surrounding adults as for Eve. Now the left nostril. There. Here she was degrading herself for Eve. Maybe destroying herself. She didn’t do this every day, though she knew she did it too much. How could you tell recreation from addiction? Where was the line? What a question. Here she was in the museum restroom shoveling coke in her nose with her housekey. Wherever the line was, it was way behind her.

So good for her. She could have stayed home and put on Playhouse Disney. Instead she risked humiliation and arrest for her daughter’s sake. She knew she was romanticizing degradation, and congratulated herself for that as well. Because for her daughter’s sake she would not despise herself. She would not make the girl live with a self-pitying, self-hating, guilt-making depressive. Eve needed a mother with the strength not only to show her the triceratops but to have fun doing it, no matter how shitty she felt. If Amy died tonight, her daughter would remember a last day not with a groaning lump mommy sipping Gatorade on the couch beside her, but with a game goodtime mommy snapping pictures of her next to the giant head frill. Maybe a slightly jumpy mommy, but nobody’s perfect.

Okay. The right was ready again. Make it a big one; might not be able to come back for a while. Now the left.

Before Eve could complain, Amy had shut the door and poked her in the stomach. “Patience is the mother of virtues, you little snit. You want to start with the dinosaurs or the whale?” She tasted the sour drip in the back of her throat, both stinging and numbing, working.

“I want to see dead people,” Eve said, in a very serviceable deadpan.Amy laughed and poked again. As she washed her hands, she looked at herself in the mirror and forced on smile. Mom of the year. Dead from work and drink last night and probably a cold, bleary from lack of sleep, and still she was here with her daughter at the museum. Having a party, just the two of them. 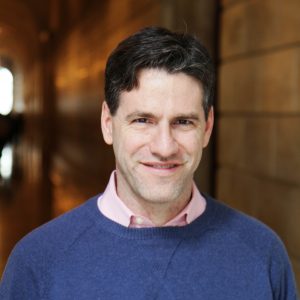 Formerly an editor and writer for Frommer’s travel guides, Jeff Soloway is now an executive editor in New York City. In 2014 he won the Robert L. Fish Memorial Award from the Mystery Writers of America. His Travel Writer mystery series is published by Alibi, Random House’s digital imprint for crime fiction. The third novel in the series, The Ex-President, about the resignation and mysterious comeback of America's billionaire, reality-television-star president, is just out.