I wait for my father to finish his coffee. He’s already dead, the venom filtering through his veins, but he doesn’t know yet, won’t until his last moments. I listen to the sound of his voice, the faint Japanese accent coloring his fluent English. It is the last time I’ll hear it—at least in this world. Listen, he says. Learn. Do what they tell you to do. He gives me the same advice whenever I’m home.The war had imprisoned his pride behind barbed wire and there it stayed. The father in my memory died long ago. I couldn’t stand the man he’d become any longer.

He sets his cup on the table. His eyes grow wide and clutches his heart with his left hand. He reaches out to me, grasping for more life, more time to grovel. The pain on his face is almost too much for me to see. I resist the urge to apologize. I’m doing him a favor, doing myself one, too. His misery ends when his body goes limp and collapses against the table with a soft thud. I felt bad about the poison. I hoped it would cause less pain, not a heart attack.

I slide the phone closer to me and pick up the receiver. I call the police. A woman answers after a single ring. She asks for the emergency.

“I murdered my father,” I say before giving her the address and hanging up.

Were the situation far less serious, my father would’ve told me I was doing the right thing. Americans love it when outsiders admit their sins against the nation. I pick him up off the table and take him into my arms the way he used to do for me in my earliest memories. He was strong then. I placed him on his bed, laying him to rest in a straight, orderly fashion. My mother smiles at me from the framed photo on the nightstand. I remember her burning the kimono she wears. The war ruined my parents—ruined me. I slide her photo face down underneath my father’s hands. When the police find him, their work will not be so hard.

I return to the kitchen. Eight minutes have passed since the call. The first squad car should arrive in a few minutes. They will approach the door with caution, their guns out, a movie scene playing in their minds—a crazed killer sitting in the dark prepared to fight to the death. The unlocked door will surprise them, and the silence will scare them, but silence is all they will hear. They will never escape the bodies the way their fathers couldn’t escape the war.

The coffee pot is still hot. I pour myself a cup. I drink half of the cup in a single swig, burning my throat. Upstairs, the neighbors are playing an old Harry James record. The band at Rowher used to play Harry James songs, though Seiji couldn’t hit the high notes on his trumpet. Seiji wasn’t bad, just ordinary, so ordinary we used to call him Harry Lames. I wonder what happened to him. Too late to find out now.

I finish my coffee. 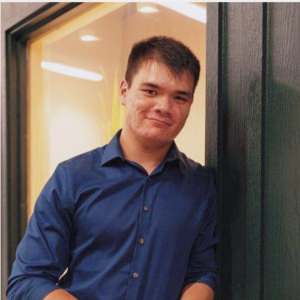 Winston Bribach is an Asian American writer and scholar pursuing graduate studies in English at Texas A&M University. He is a fiction reader for CRAFT and his work appears in FlashBack Fiction and Spelk. When he's not reading or writing, you'll find him lamenting the current state of American soccer.