Portrait of a Young Lady Before Her Murder

It was late, but it felt early. Like something was supposed to happen, and it hadn’t even started yet. Delilah’s parents would be in bed, her mother knocked out with one of her Nembutals; they wouldn’t notice if the car was gone another hour. Not that they had any right to tell Delilah what to do. She was twenty years old now, after all.

So instead of turning right, toward the Spanish bungalow where she’d lived her entire life, Delilah turned left, toward Last Stop Lookout. So-called since the September afternoon four years ago when James Dean stopped his Porsche Spyder at the gas station below the hill, met up with a few race-car drivers, then drove off to his fatal meeting with that Ford.

The lookout had been Lost Hills’ prime necking spot forever. Even when Delilah’s mother was young enough to ride around in cars at night, kissing boys. But since James Dean’s death, it had been rechristened as a shrine of sorts. People still brought flowers. And then the high-school kids drove over them as they sped back down the hill, their brains buzzing with the stolen beer they’d gulped before they gave in to their lust and left the car windows steaming. Rebels for kicks, like their lost idol.

The Last Stop was empty tonight, though. Delilah parked at the top of the hill and sat on the Plymouth’s hood. The metal held the heat of the day, and it thrummed through her skirt, into her skin. She dangled her legs, kicking her feet back and forth, and looked up.

From here the stars were an infinity of possibilities above her head, just out of reach. She was only two hours from Hollywood, but she might as well be a universe away.

Delilah had liked James Dean, but she’d never gone crazy over him the way some of her friends had. She was always more of a Marlon Brando girl. Still, she couldn’t help thinking about it now: the moment of the crash. James Dean’s silver Spyder, the racing car so sleek, so streamlined, moving with such speed it almost seemed to soar above the ground. Despite its power, its grace, the car would have been no match for the lumbering Ford that slammed into it, that sent the race car cartwheeling across the highway and into the dirt to die. The photos she’d seen of the broken Spyder, her beautiful curves crumpled and disfigured, had turned Delilah’s stomach. She didn’t want to imagine how his body looked inside.

When you read about car crashes, they said that the metal twisted. Delilah had always found this concept perplexing. How could something so solid as metal, built onto a frame that could carry passengers across countries and through lifetimes, change its shape so completely? What force, what violence, could so utterly alter a thing you thought you could rely on? She pressed her hands against the warm hood of the Plymouth, then curled her fingers and lifted her palms, as though she could pick the metal up like a handful of coins. Use them to make a wish. But she couldn’t, of course.

Delilah would do whatever she had to, in the years to come, to become a star like James Dean, a star like the ones in the sky above her, and make it out of this Podunk town. Whenever a man smiled and told her she looked just like Natalie Wood, she would smile back. She would act out shameful scenes in black-curtained rooms. She would steal all the cash from her father’s drawer. She would hitch a ride in any man’s car, at any hour of the night, so long as he could take her to the highway going south.

But on this night, none of that had happened yet. Delilah’s own limbs had not crumpled and twisted like a Spyder crushed by a Ford. On this night, Delilah simply sat atop her parents’ car. She planted her feet on the hood, drew her knees toward her chin in the posture of a little girl.

She was clutching air in her palms and violence in her thoughts, looking up, up, into the star-filled sky. 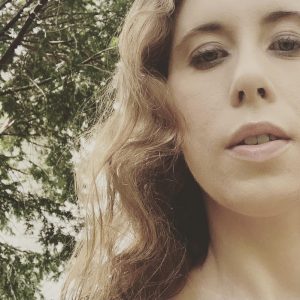 Stephanie Parent is an author of poetry and prose and a lifelong lover of noir. Follow her on Twitter at @SC_Parent.