The disease had ravaged her body. She bore little resemblance to the woman she once was, but he still loved her. He’d long since forgotten what day it was. Gray stubble covered his cheeks and made him look older than his forty-five years. The smell of the stale broth on the nightstand, and the odor of her soiled bedspread, no longer caused him to recoil. He picked up a partially melted ice cube and dragged it across her cracked lips, watched the light refracting on the droplet’s surface, and glisten against her skin.

It wouldn’t be long now.

He gripped her hand within his own. He could feel the pronounced tendons underneath her skin. Her fingers curled slightly, exerted pressure, and her eyes flashed. For a moment, the color returned to her face, and he leaned forward. Her throat constricted. He placed his ear near her mouth and felt the warm foulness exhale along with her words.

She died, and he wept.

He looked at her sunken form. Bottles of medication covered the nightstand. The writing was strange hieroglyphics to him. He fled the bedroom. The living room was in perfect order, which was somehow an affront to the chaos in his life. He stepped over to his desk, a big rolltop monstrosity; opened the drawers, and rummaged around. He finally found it, underneath his checkbook, and shoved it into his front pocket.

The front door opened. He began walking in earnest, following the path which led from their cottage to the road. He heard the sound of the machine before he saw it on the horizon. The transport carried soldiers from the Belgian Explosive Ordinance Division.

The man stood off to the side of the road and watched the truck pass by. Six of them sat on the truck bed decked out in Demon Suits. Most paid him no attention; content to discuss the score of last night’s FC Brussels game or enjoy a quick smoke before the task at hand. The truck disappeared down the road. It was the Iron Harvest. Farmers would plow their fields and the disposal unit would collect any unexploded ordnance from the first war.

He continued walking, veered left, and thought about the soldiers from that generation on the front who operated the mortars and shelled the countryside. He imagined the oxidation, the corrosion, and the iron deposits poisoning the soil and the water supply. He imagined his wife drinking that water. He thought of melanoma, carcinoma, cell replication; nature’s retribution against such a gross violation by mankind.

He crossed the road and approached the first house. He noted the contours of the thatched roof and the color of the wood which had been used to fabricate the front door. He heard nothing but the sound of the chimes rattling against each other from the wind. He knocked on the door and felt his heartbeat rise in his chest. Sweat dripped from his palms. He reached into his pocket. The door opened to reveal a slender-looking man. All of the slender man’s features worked in harmony with his character; green eyes, blonde hair, deep tan. The slender man would have said hello, and welcomed his guest inside.

The gun spoke instead.

The report was louder than he expected and his ears rang. His hand jumped as continued to squeeze the trigger, but three bullets hit center mass. The slender man fell backward, his shirt already turning from white to crimson. Garbled words escaped from the slender man’s mouth, and he lay sprawled on the floor. He let the gun drop to the ground and watched Arthur’s slender body convulse in awkward gestures then cease altogether. 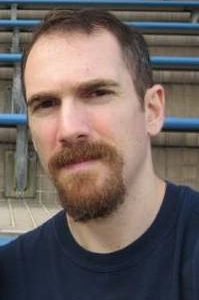 Andrew Davie has worked in theater, finance, and education. He taught English in Macau on a Fulbright Grant and has survived a ruptured brain aneurysm. He has published short stories in various journals, magazines, crime fiction novellas with All Due Respect and Close to the Bone, and a memoir. His other work can be found in links on his website https://andrew-davie.com/