He looked at the gun sitting in the open dashboard. A .45. Or was it a 9… a 9-something? What had the guy called it? He’d never fired one before and didn’t really know why he’d bought it. It just seemed like something you’re supposed to have. Besides, he figured she might have one. At this point, there was no predicting what she might do.

Her figure shifted in the car across the lot from him. He tried to get a good look at her but she had lowered the visor, cast herself in shadow. He wondered what she looked like these days.

He stuffed the unloaded gun into his waistband like he’d seen in the movies and grabbed the leather satchel from the passenger seat. He sighed. He climbed from the car, leaving behind nothing but the new car smell.

As he got closer to her, he could hear the faint sounds coming from her trunk. Muffled kicks and curses.

She slid easily from the driver’s seat, graceful even in this. She wore sunglasses and a big black hat and a blouse and sweatpants spattered with flecks of blood. Long, lustrous black hair fell from beneath the hat. Even under the dirty yellow light of the garage, her olive skin was luminous. He didn’t want to look at her.

He leaned against the car and tried to let his blazer fall open to casually reveal the gun. It didn’t and he had to yank it the rest of way.

She looked at the gun, then at him.

“You look like an asshole,” she said. “You know that, right?”

At the sound of his voice, a loud wail came from the trunk. He wondered how much blood was being lost from the severed finger.

“I don’t understand.” He looked over the cement barriers of the parking garage and out to the city, hoping that looking farther off would take him away from the sounds of the trunk. “He worked so hard.”

“That was family money. You know that.”

She jerked it from his hand and unzipped. Flipped delicately through the contents. Slim green bricks of one hundred dollar bills.

“Oh gee, thanks mister. I won’t even count it.” She sneered.

“There were other options. Legal options.”

“He didn’t deserve all this.”

She stared at him from behind her sunglasses. He imagined the fire hidden behind them.

She wiped a hand roughly down her face like a bear’s paw with some dead thing. When her hand dropped, it revealed the flesh beneath her makeup. A bruise, deep and dark and fresh. She rolled up her sleeve to show her forearm. Bruises in the shape of five fingers, encircling her. Holding her.

“I’m moving. Getting new papers. You won’t be able to find me.”

He held out the keys to the car. She stepped forward. Inches away. She took his hand in both of hers. He was shaking now and he didn’t know why. She took the keys and pressed something hard and metallic into his fleshy palm. She folded his hand together into a small fist. He stood, frozen.

“You know, I mean, just so you know, I hadn’t seen him in five years. Not even spoken.”

“Whatever you need,” she said.

She walked to the car, gunned the engine.

He looked down at his sweaty, open hand. The thin gold band stared back at him. It had no shine to it.

He watched her drive from the lot and away to wherever she wanted. He fiddled with the ring in his fingers, rolling it over and over in the sick light and listening to his brother kick and kick, wondering just what he’d gotten for his money. 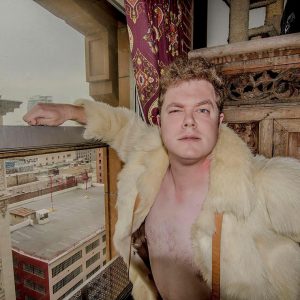 Graham Bowlin is a writer. His stories have appeared in Thuglit, Crime Factory, Typehouse Magazine and others.