Second Tuesday in December, Cadence found the first gift. It was sitting on the doorstep: a plush rat, oval-eyed, grinning behind cellophane.

She had stepped out for a quick puff. Frost slicked the browning lawn, but there was none of it on the toy’s wrapping. Someone had dropped it here recently.

Had to be Jeremy, right? Eight or ten days out of Lompoc now, and wanting back into his daughter’s life.

Aubrey ambled out from the hallway, picking at eye-boogers. “What ya looking at, mama?” she said.

Constantly with the questions, this one.

Before Cadence could reply, her little girl noticed the gift. “That for me?” She reached for the stuffed animal. So grabby, always.

As her baby ripped open the packaging, Cadence trudged for the kitchen. The coffee in her mug had gone cold already.

Two days later: the next present. A cream-colored gift box, embossed with sparkly holly leaves. Aubrey found it first, but when she carried it to her mother, the delight was already withering from her face. Cadence glanced inside: a surging mass, dung-colored, alive. Earthworms, writhing.

Was Jeremy trying for a joke?

Still a dumbass, Jeremy answered his aunt’s front door without checking through the curtains to see who was there. His eyes enlivened at the sight of her.

Cadence was less enthused. Her jaw worked at the Nicorette.

The truth? She could have forgiven her ex-boyfriend so many transgressions, if only he hadn’t sold her cousin Richie that first batch of fentanyl, which drove him to Oxy, and then to the Mexican Mud that left him lying dead with a spike in his arm.

“Cut it out with the gifts,” Cadence said. “You’re not getting visitations unless the judge orders them, hear me?”

Jeremy’s face went slack. He didn’t bicker. His skin had gone pallid in the can, and his tats seemed to have drained out their color.

“Stay gone,” Cadence said, and hustled toward the roadway.

“Hold up. Cadence?” Jeremy said, his inflection all baffled.

Cadence couldn’t help but stop, hear him out.

“What gifts you talking about?” he said. “I never sent any gifts.”

All the blood sluicing through her veins turned icy.

No question now, the gifts were a threat. Not from Jeremy, either–the confusion she’d seen on his face yesterday had been legit.

Some old associate of his, then? Trying to scare them?

Fury rustled inside her, a waking animal.

The guy in the camo jacket, his name was Rusk. Near as she could recall, he had inherited some of the Rosemead circuits when Jeremy went inside. Apparently he didn’t want to cede them back now.

Cadence waited for him to place the next gift–a burlap satchel–and then double away across the dewy grass. She had practiced opening the front door noiselessly. When she eased open the satchel, a dead sparrow dropped out.

Rusk didn’t hear any of this. He didn’t hear Cadence come pattering after him. He didn’t hear the swoop of the Louisville Slugger. The scuffed wood of the bat connected with the groove behind his knee. That leg buckled and dropped Rusk into the dew. Cadence swung again, connected again.

Wonder of wonders, huh? Apparently Mama Bear had come slouching out of hibernation after all.

Cadence groped along Rusk’s waistband, sifted out the S&W .38 and pressed the barrel against his pressed-shut eyelid.

“Whatever beef you got with Jeremy is between him and you,” she whispered close against his ear. “You threaten my little girl again, I’ll put a bullet through this socket. You feel me?”

His body shrank, and his head jerked in a nod.

Indoors again, Cadence went to the laundry sink to rinse the blood from the baseball bat before it crusted there. Her daughter, so bright, so inquisitive, she noticed most everything. 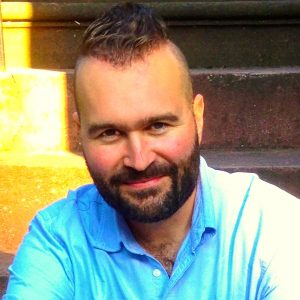 Blair Kroeber is a screen and fiction writer, living in Los Angeles. His stories have appeared in the pages of Thuglit and Looking Glass Magazine, and on the web at Blumhouse.com and the Mulholland Books genre fiction site Popcorn Fiction. Catch up with him on Twitter @BlairKroeber.