Mickey was so dopesick his hand shook when he answered the motel room door. Outside was Babes Dela Cruz, a strange sight for bloodshot eyes, in her thin dress and patchwork coat, the little Filipina grandma looking more like a homeless lady than a smack dealer.

“Didn’t expect you to come yourself,” Mickey said.

“Heard this might be my last chance to see you. Can I come in?”

Mickey moved aside, realizing too late his duffle bag was sticking out of the closet. When Babes shuffled past, he kicked it in and forced the closet closed.

“You’ll never see me again,” Mickey said. That much he was certain about. By the end of the week the cops would assume he was in the wind and bring the checkpoints down, making it safe to cruise out of town.

“Glad I came to say my goodbyes, then. You’ve been a good customer, Mick. Hate to lose your business. But I wish you well.”

The old woman smiled, revealing a silver tooth, then produced a black balloon. “Brought you something special for your last hit.”

They exchanged cash for drugs in one smooth handshake. It took every ounce of Mickey’s remaining willpower not to shoot up right there. But he couldn’t. Not until he and the money were alone.

“You know, I was worried about you,” Babes said. “Heard on the radio about a bank heist. Two hillbillies with AR15s. One shot dead. Description sounded an awful lot like your buddy Pete. Where is he by the way? First time I’ve ever seen you two apart.”

“Okay,” Babes said, taking the hint. “Well, I guess I’ll leave you to it.” She saluted him with two fingers and shimmied to the door.

Mickey chained and bolted it behind her then scrambled to the closet, retrieving his kit with lighter, needle and spoon and paused to unzip the duffle bag and admire the stacks of cash.

Then he zipped it back and cooked up the junk.

Mickey was about to tie off when he realized what was missing from his makeshift pantry atop the air conditioner: the cartons of Camels Pete was supposed to bring.

“Shit.” There was no way Mickey could kick alone and smokeless.

A convenience store across the street could solve that problem, but the plunger was already drawn and Mickey needed to shoot up now.

A skin pop. That was the solution. Instead of accessing a vein, he’d just shoot the heroin into the soft tissue so it would come on slowly. Give him about five minutes, before the drug really took hold.

Mickey stabbed his scarred skin at a shallow angle and mashed the plunger, sending a blaze of fire down his arm.

This was the worst part. The calm between the cravings’ cessation and the onset of euphoria. That’s when the guilt and the shaem always set in. Worse now with Pete to mourn.

No time for tears though–clock was ticking. Mickey unlocked the door and stepped out into the light when a bony fist came out of nowhere and clocked him in the throat.

As much from shock as pain, Mickey fell back into the room. Babes came in after and kicked him in his side. Mickey was about to trip slam the old bird, when the drugs hit way ahead of schedule and with more vengeance than anything he’d ever experienced. Ice cold shivers followed by a thousand pound weight squashing the air from his chest.

Drooling and gasping, Mickey clawed fecklessly at the floor, watching Babes retrieve the money. The last thing he saw was her blowing him a kiss and saying, “Told you that last hit was special.” 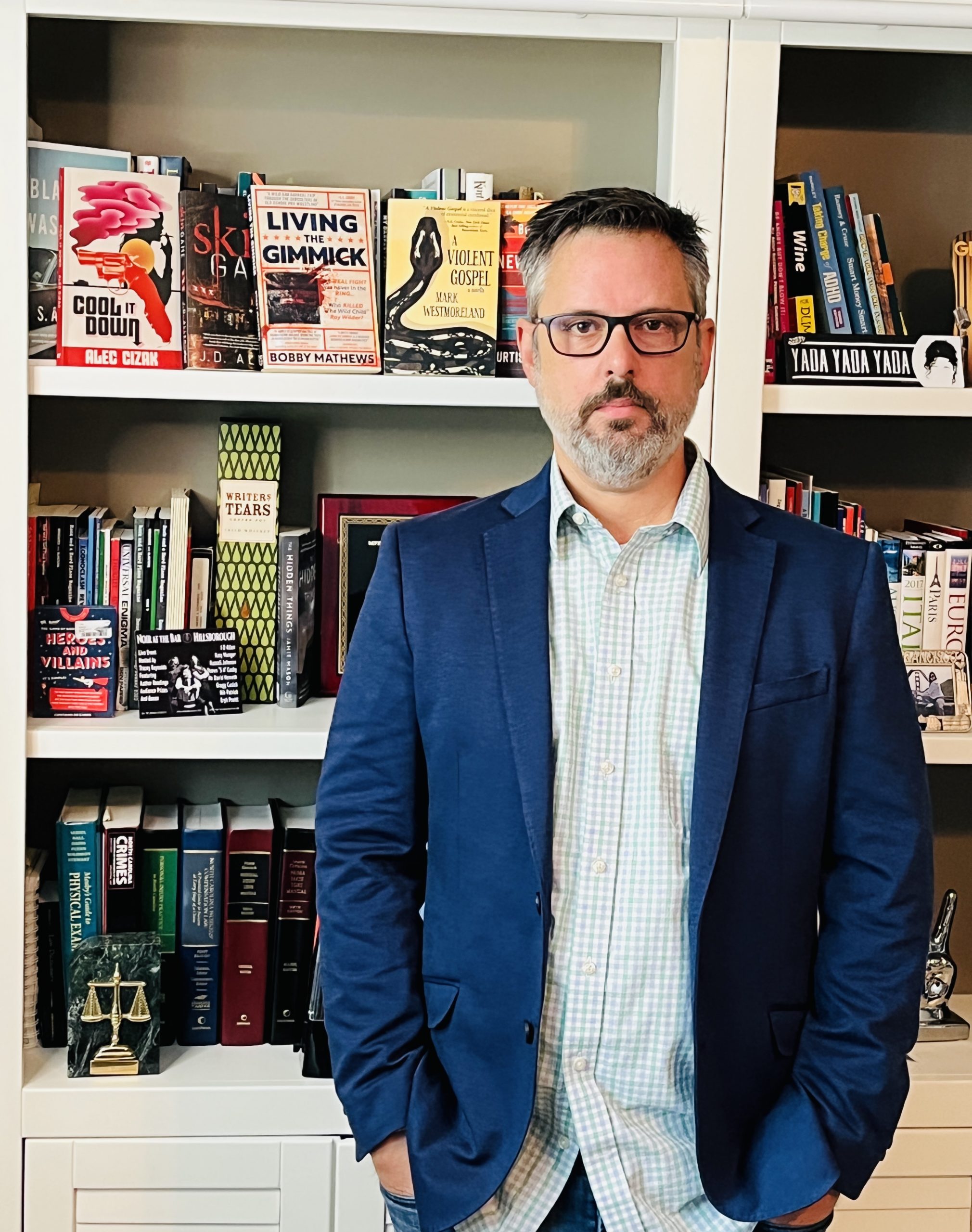 Russell W. Johnson is a North Carolina attorney who got so sick of billable hours he began writing crime fiction. His debut story, "Chung Ling Soo's Greatest Trick," was published by ​​​​​​​​​​​Ellery Queen Mystery Magazine and won the Edgar Awards' Robert L. Fish Memorial prize for best short story by a new author. Since then he has been published in a number of outlets and been a finalist or nominee for the Pushcart Prize, Claymore Award, and Screencraft's Cinematic Novel Competition.