They didn’t bother with a parole hearing when the diagnosis came back terminal. I got escorted from the infirmary, handed my belongings, and showed the door. They didn’t even tell me how much time I had. At least when they shuffled me inside of those walls, I knew when I was checking out.

When someone gets this sickly, they drop the bullshit they’ve hauled around their whole life in hopes of leaving people with a little sadness in their hearts when they go, except my father. His last words were, “I’m going to Hell,” not, ‘Please forgive me for how I treated folks.’ He was a man of conviction who solidified his mythology before closing his eyes involuntarily. And I am my father’s son.

Dad willed me the switchblade he took off a handsy drunk who groped my mother while she was still pregnant with me and still waiting tables. He buffaloed the drunk over the guardrail running along the backside edge of the parking lot of the bar and grill, and gravity killed him somewhere along the sloped retaining wall on his way to the alleyway waiting below. Dad never even felt the cold pinch of stainless steel on his wrists over that one. Self-defense, as they say.

His house may have gone to the county for owed back taxes, but granddad’s guns came with me. Had I been a parolee that’d been a parole violation, but I’d been freed so I could die without placing any further burden on taxpayers. That’s unofficial state policy.

Lonnie’s Guns & Gold could have passed for a museum of my entire earthly possessions, including the shoulder mount of a cinnamon-colored black bear I bagged the first fall after high school along with a fifty-five-inch muskie I landed about six years back. Dad’s favorite bucktail still hung from its lower lip. How heartless do you have to be to pawn heirlooms and keepsakes? Who the hell would buy some other guy’s trophy mounts? That’s the tradeoff for landing a trophy wife, it seems. I think that the last part was out loud because the pawnbroker came at me with some questions, too.

“Did they let you out early for good behavior?”

“Nope. We know better than that.”

“Didn’t escape, did you? You weren’t on the news,” Lonnie said, pointing to the wall of TVs from behind the bulletproof glass with a universal remote.

“Ass cancer,” I answered before he could find the news channel.

“You’re about as subtle as a ventriloquist with hiccups.”

“You want to call Miss Cleo? See what your future holds since today seems your lucky day?”

“Y’ain’t coming back here to use my phone, so if you’re done fondling my goodies—”

“I hate to come off sounding like an echo, but are you done fondling my goodies?”

“If you have a pawn slip and the cash, I’d be happy to return what is yours. If not, sorry. Call the cops, tell them your stuff was stolen and fenced here. Then they can take it into evidence, and you’ll see it one day. Possibly. Maybe.”

“I’ll need to borrow your phone for that—payphone’s busted to shit.”

“Borrow, no,” Lonnie said and snickered. “The way you’re wanting to borrow and check things out of here, you’d think you walked into the library.” A smart-mouthed tough guy perched behind umpteen layers of laminated glass. “No withdrawals or IOUs here. Try the city credit union. They have a bleeding-heart loan officer who doesn’t know how to say no like a whore late with last week’s rent.”

That said, I shouldered my way passed a rent-a-cop dressed like Special Forces and waited my turn.

“Sir, I’m sorry,” the teller said. “Do you have a different withdrawal slip, or did you forget to fill this one out?”

“My apologies,” I said with an embarrassed smile. “Do you have a pen I can borrow?”

She nodded in the direction of the beaded chain to my left, and I added ALL OF IT to the box that read: requested withdrawal amount.

Then I smiled at her and added Rob A. Rhee to the signature line. 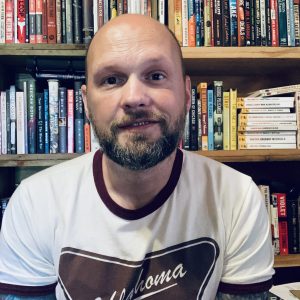 David Tromblay is a Midwestern Gothic author who served fourteen years between the Army and the Navy before attending the Institute of American Indian Arts for his MFA in Creative Writing. He's since written and published a memoir and four novels. He currently lives in eastern Oklahoma with his two tomcats, Walter and Winston, and his dogs, Bentley, Hank, and Merle.