I set fire to his Lexus on top of a hill by Chersăcosu. It was dusk and I could see weak lights scattered like pimples across the valley. Cows were walking home.

The cop had killed my cousin a few weeks back.

I was too big of a coward to exact just revenge, but I broke his thumbs and left him naked in a field of sunflowers. I told him I was going to his house to kill his entire family and tapped the rifle on his head a few times to ask if he had any questions, comments, or concerns.

He squeezed out a threatening sound after I started walking away, but it was so high-pitched I chortled. He looked beautiful, a silver mummy surrounded by yellow flowers, mouth, eyes, and head duct-taped haphazardly, eight or nine times around.

I drove slow through Pogănești. He’d been listening to Celine Dion and I turned it up, windows down, and startled a couple of drunks sitting on white plastic chairs at the corner cafe, which was called Ritz.

When I got up the hill, I sat close to the car but far enough away in case shit blew up. I’d never torched a car before but assumed there would be some explosion.

I opened two cans of Silva, shotgunned one of them and started sipping on the other. I forgot to buy cigarettes, but I found cigars in the glove compartment, so I lit one and tried to make smoke rings.

Bats flew overhead and I watched them awhile. The car never blew up and I hummed me some Celine while I looked at the flames.

I heard Răzvan’s motorcycle and drank the rest of my beer.

—He’s at the hospital, he said.

—Yeah, I figured. Was he still in the sunflowers?

—He was close to the highway already. I think he heard the ambulance and ran toward us. You broke his thumbs?

—Great job with the duct tape, by the way. He asked for my cell to call his family and told them to leave the house.

—Yeah, I told him I was going over there to kill them.

—You don’t even know where they live, though.

Răzvan grabbed my third Silva and asked for my cigar.

—Fucking slobbered all over it, he said, and wiped it on his scrubs. What time’s your flight?

—Already checked in. Need to be there in about an hour. You bring me a change of clothes?

The air was smoky all the way to the airport. Everyone was burning grass and garbage. Fires everywhere. Răzvan and I had a couple more Silvas in the parking lot.

By the time they’ll find his car, I’ll be in Liverpool. Răzvan’ll keep tabs on the cop. Next year, in loving memory of my cousin – RIP, Big Marius – I’m going to break his fucking thumbs again. Might leave him in a lavender field this time, though. 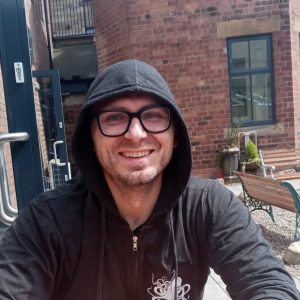 Cristian Cantir teaches international relations at Oakland University in Michigan. He grew up in Moldova and moved to the States in 1999. Cristian's fiction has appeared in HAD and The Airgonaut.