The Blonde on the Bridge

Theo Abbot was heading to his weekend evening gig at The Village Vanguard.

His fingers danced on the steering wheel of his 10-year-old 1951 Ford, playing along with the sounds of Art Tatum floating from the radio. His tires hummed to the beat of the music as he drove along the bridge into Manhattan.

A woman on the side of the bridge caught his eye, her thumb raised. He slammed on the brakes and pulled over. Her blond hair reflected the lights, and she clutched a battered suitcase.

Theo reached over and rolled down the passenger side window. “Nice night.”

As she leaned in the window, he could see her dress was torn. She looked toward him through bruised eyes. “Depends on your point of view.”

“Lily. Lily Robinson. And to answer your question, anywhere but here.”

He leaned across and opened the door. She settled in the car with the suitcase at her feet. As the car began to move, she asked, “Where are we going?”

He explained he had a regular gig at a jazz club and was heading to work.

“I guess you can take me there. I’ll figure it out after that.” They drove in silence, then she opened her mouth and couldn’t stop. “It was my boyfriend’s fault. He’s mobbed up. Money went missing. The bastard told them I was the one who took it so they’d let him alone. When he warned me, I packed my things, but they came too quick. They knocked me around and threw me in the trunk of their car. I knew it was gonna be a one-way trip.”

“Morons left a tire iron in the trunk. I jimmied the lock, rolled onto the bridge. I figured they’d come back for me when they saw I was gone, but I hoped someone would give me a lift before then.” She was done talking.

At the club, Theo pointed her toward the bathrooms. The rest of his trio was setting up. Scott Evans tapped a drum roll. “Who’s the honey you got with you?”

Theo shrugged. “A damsel in distress. I gave her a lift.”

“So that’s what you’re calling it.” Carter Roland, the bass player, winked at him.

“Knock it off, guys.” Theo sat at the old Steinway upright. He ran his fingers along the keys and then into “Spring is Here.”

As he played, he could see Lily head for the bar and get a drink. Suddenly, she jumped from the stool and ran toward the back of the club. Two men chased after her. She’d told Theo they’d come back for her. They must’ve seen her get in his car and followed them.

Theo stood and raced toward them. “Wait. You got it all wrong.” He didn’t see the fist coming in time to duck. As he fell, he saw Lily leaving through the side door, the men behind her. When he caught up, he heard tires squealing and saw the back of a car speeding away. No sign of Lily.

The club manager quieted the confusion with an offer of free drinks. No one suggested calling the police. People like that, best not to interfere.

Theo didn’t feel he had anything useful he could tell the cops either. He hoped Lily would manage to escape again.

When they finished the last set, Theo went to the bar. As he climbed on Lily’s stool, his foot hit something hard. He looked down and saw her suitcase.

No one was watching as he picked it up and walked out of the club. At his apartment, he sat on his worn couch, the suitcase next to him. Probably full of old clothes. Releasing the two latches, he flipped the lid open. As it hit the back of the couch, he saw the stacks of bills that filled the suitcase. “Oh Lily,” he said aloud. “It wasn’t worth it, was it?” 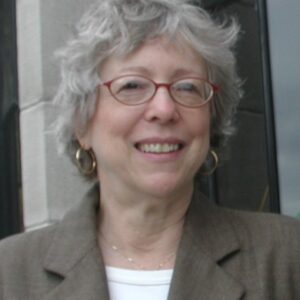 Wendy Harrison is a retired prosecutor who turned to short mystery fiction during the pandemic. Her stories have been published in numerous anthologies including Peace, Love & Crime, Autumn Noir, CRIMEUCOPIA: Tales from the Back Porch, The Big Fang, Gargoylicon, and Death of a Bad Neighbour. She lives in Florida with her first-reader husband Brooks and their Shepherd mix, Cooper.