Carl couldn’t remember how the fight got started. He thought he heard the insult, incompetent moron, but that might have come from him. Carl had been using that expression a lot lately, began just days after the new sous chef arrived. The new sous chef, Derrick, had become a source of annoyance and disappointment for Carl. As Executive Chef, Carl was responsible for everything that left the kitchen, and when it was not up to his standards he let the sous chef know. Derrick did not appreciate that, which might explain his inappropriate use of the frying pan.

Carl didn’t remember the strike of the frying pan against his skull, only the dizziness and ringing in his ears that followed. He didn’t see Derrick’s fists coming at him, only his own split lip and swollen eye reflected in the changing-room mirror.

What Carl did remember was that at one point his hands were curled along the moist collar, pressed against the limp hair, and tightened around the throat of Derrick. He couldn’t forget how Derrick gagged when Carl squeezed harder and how he collapsed at Carl’s feet. He’s not sure if that’s when it happened, but that’s when Carl realized the top button of his coat was gone.

Originally Carl was pleased that his chef’s coat had his initials etched into the top button, but now that missing monogrammed fastener was just a threat to any plausible denial.

“Where is it? It was there when I put on my coat!” Carl’s concern turned to panic as his right hand slapped against his collarbone, unsure and frantic. He stared down at the seven remaining clasps, still attached and orderly. He plucked and swiped against his pockets for any hint of its form. Under and beside, he poked in every gap in the kitchen, rattled through each drawer.

Carl thought that the button must have rocketed off sometime during the struggle. But where did it end up?

Did it catapult past the lips of Derrick and forge into his esophagus? Is that why he convulsed as his eyes rolled back into his head? Or did it slide past Derrick’s dental implants straight through to his ulcer before Carl crushed his larynx?

“Where is it?” Carl was tormented by a mixture of confusion and fear. Because his state was still embedded in the death penalty, he knew he had to find that condemning button before anyone else did.

With limited options and his temperament propelled towards crazy, Carl made a gruesome decision. He browsed the butcher block for just the right thickness. Although sharp enough, a knife too thin wouldn’t be able to bite through with the necessary fervor. Too thick wouldn’t allow for the delicate manipulation required.

He peered into the walk-in refrigerator where he had hidden Derrick’s body. Carl believed that Derrick had swallowed, and now contained, the coin-shaped evidence…and there was only one way to find out for sure… 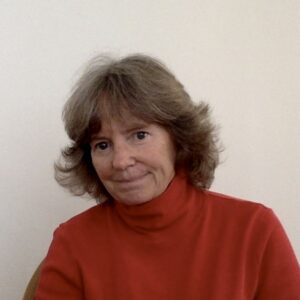 Julie Burandt lives in California with her husband. In January of 2021, her first flash fiction story, Snake in the Window-Killer at the Door, was published online by Mystery Tribune.