I don’t like the way that cunt’s looking at me, thought Jeremy.

The woman wore a conspiratorial smile, half hid behind a hand as she whispered to her friend. But her eyes, her eyes remained focused on him.

Jeremy shifted where he sat, scratched the crease where thigh met crotch.

But no, best not to confront her. Women in groups created complications. He’d wait until she didn’t have her Benetton ad backup. Then they’d see how confident those clothes really made her.

Jeremy’s mother squeezed his hand as the nurse administered the shot.

“See?” the nurse said as she massaged the arm afterward. “That wasn’t so bad now, was it?”

The old woman swiveled her head on its frail neck to gaze adoringly at her son.

“Not with Jeremy here, it wasn’t.”

Jeremy smiled and patted the hand holding his. He could feel the bones shifting under loose skin. He stifled a shudder.

“Your mother’s a brave woman,” the nurse told Jeremy.

“One of the bravest,” he agreed.

Jeremy occupied his usual people-watching spot. They were all so glossy, so attractive. Little snapshots of perfection frozen in time. He wanted to destroy them.

One guy made the mistake of holding Jeremy’s gaze for too long, some fag in tight jeans and a deep V. Jeremy sneered. Those people creeped him out, but a small part of him enjoyed being looked at. He shifted his attention to the woman, obviously not the guy’s wife, and ran down a list of the horrible things he wanted to do to her.

He spent the rest of the day glad-handing in his best suit. He knew exactly when to smile, and when to punctuate that smile with a laugh. He knew to keep the engine running during dinner, or when he made perfunctory love to his wife. He didn’t give his face a rest until after the ritual of kissing his two daughters goodnight.

But some days he needed to do more than just watch.

The woman reclined on the bed, tanned legs spread wide. Try as he might, Jeremy couldn’t stop staring at her crotch, couldn’t meet her come-hither look. Her perfection disturbed him.

A sound pricked his ear. Were those footsteps? Jeremy scanned the room despite the improbability of someone else being there. His eyes alighted on the doorknob—locked.

He looked at the woman and put a finger to his lips. The air hung heavy with lust as they waited. Eventually the footsteps receded. Jeremy exhaled and the blood began to flow south once again.

He raised his hand and brandished a box cutter. If this disturbed the woman her eyes gave no indication. She remained still, allowed Jeremy to press the blade against the hollow of her throat. He made the shallowest of incisions, dragging the blade between her breasts and down her abdomen. Her skin flowed around the blade like water around an oar. The woman’s expression never changed.

Jeremy licked his thumb and turned the page. The woman flipped over onto her hands and knees, exposing herself like an animal in heat. The barest imprint of the previous page’s cut ran down the back of one thigh. He possessed that fine of a touch.

But it wasn’t enough.

He flipped back to the previous page and realigned the blade with the incision. This time he pressed harder.

A thin line of blood welled up from beneath the paper. His thigh began to itch. The sensation sent a shiver coursing through him, weaker than the last time, twice as weak as the time before that. He pressed his finger to the hollow of the woman’s throat and dragged it down her body, smearing the blood. Next time he’d have to cut deeper.

He pressed the pages of magazine firmly together, then stashed it in the wicker basket next to the toilet, between a year’s worth of fashion magazines. Then he cleaned himself up and put on his smile, went to see what his wife had made for dinner. 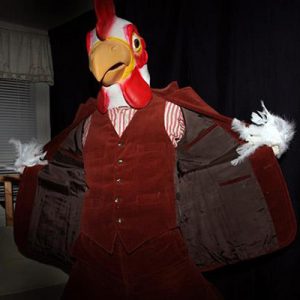 Joshua Chaplinsky is the Managing Editor of LitReactor.com. He has also written for popular film site Screen Anarchy and for ChuckPalahniuk.net, the official website of ‘Fight Club’ author Chuck Palahniuk. He is the author of ‘Kanye West—Reanimator.’ His short fiction has appeared in Zetetic, Motherboard, Vol. 1 Brooklyn, Thuglit, Dark Moon Digest, Pantheon Magazine, Fabula Argentea, and multiple print anthologies. More info at joshuachaplinsky.com.