They’re ambling down a log road that cuts through a thick patch of woods. Their faces are pink from the cold, and they keep pulling up their collars to block the wind from their necks. The older one, Peck, holds a GPS tracker and studies its coordinates, while Lohr keeps his hands stuffed inside his pockets and his eyes wandering over the ancient woodland terrain.

“How much farther? Goddamn balls freezing off.”

“Maybe you shouldn’t shave them so much.”

“You eyeing my junk at the urinal again?”

“We’re close. I think. Wade could only remember where he might have dropped it.”

“Thinks he lost it while taking a shit next to a tree.”

“Well that narrows it down. Be lucky if we don’t get outta here without some toothless mother fucker trying to make us squeal like a pig. What the hell did we do to earn this shit job?”

“We agreed to do whatever Wade tells us to do if we want a fat stack is what.”

“But why this? Drive four hours to Bigfoot’s backyard in goddamn December to find a lost hunting knife? This is some serious asking.”

“I told you, the knife was his dad’s or something. It’s like a family heirloom.”

“Well why didn’t he just ask the shitkicker who owns these woods to come find it?”

“Because he told us to come find it is why, and he pays us to do what he says.”

“Yeah, but look at us, man. This isn’t trolling gambling boats collecting from deadbeats late on a loan, we’re in bumfuck nowhere looking for a knife!”

“Quit your bitching. Huh? You think I don’t know Wade is a fucking idiot? Do you?! I mean, who in their right goddamn mind would invest half his nut with these half-wit hillbillies to grow legal weed, when they don’t even have a state license to do it yet?”

“I thought he came out here to go deer hunting.”

“He only came hunting with these yahoos to chat them up on partnering on their dope enterprise. Wade’s never been hunting in his whole damn life. Hell, I doubt he’s ever even been in the woods before.”

“Why does he want to get into legal weed?”

“Says he wants to go legit, which I don’t buy for a second. But still, who the fuck knows what Wade ever thinks.” Peck checks the tracker. “Let’s just find his fucking knife and get the fuck back home, okay?” He then steps off the log road and heads down into a deep holler.

Lohr blows air into his cold hands, studies his partner, then hurries to catch up.

“Wade’s not being honest about what?”

“He could be just pulling another one of his hustles.”

“Come on, man. You can’t just leave me hanging.”

“Alright, look. Don’t be tattling none of this, but Linda is ready to divorce his sorry ass, so he’s been pulling out all the stops, promising to take her on vacations, tidying up his business misdealings, giving her all she wants. So this talk, of cashing in on this legal weed, getting so-called legit, is probably just his horseshit way of pacifying her till she changes her mind. But she ain’t going to.”

“How you know all this?”

After a couple hundred more steps down into the holler, Peck slows his stride, still monitoring the GPS, and nearly steps into a freshly-dug deep hole in the ground.

He feels the burn of an eight-inch blade slice into his shoulder, and as he spins around in question, he watches Lohr stab him in the gut with a hunting knife. He then stumbles backwards, grabbing his stuck belly, and down he falls into his hillbilly grave.

Lohr stands over him, spits. “You were right about Wade. Who can ever know what he’s really thinking. He only told me to tell you that he didn’t appreciate you fucking Linda. And like you said, Wade orders us to do something, and he pays us to do what he says.” 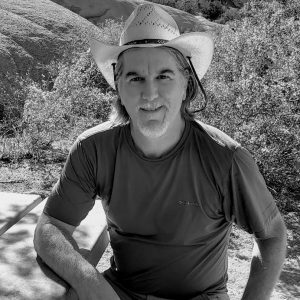 Sean Jacques is a fifth-generation native of the Missouri Ozarks and currently resides in Los Angeles. He has written screenplays for TNT, John Woo, Guy Ritchie, and other film producers, and his short stories and poetry can be found in a number of literary magazines, including: Cowboy Jamboree; Pulp Modern Flash; 34 Orchard; Across The Margin; Punk Noir; Flyover Country; A Thin Slice of Anxiety; and Dead Fern Press.