The two men walked among the ancient ruins at the back of the tour party pack. They abstractedly inspected the stubs of volutes, columns and temple friezes. Dust, grit and a kissy wind. They felt braised with a skin they didn’t dock, earlier that morning, at Piraeus harbour in.

They were fluent in the brief, the target, the appointed hour and process. They knew the mark – his name, room, secrets and movements. Their trust was stockpiled in each another. They were on fake name terms: Honcho and Bronco. They wore pressed linen, grey slacks and mirrored Polaroids. Bronco mopped his neck with a handkerchief. Honcho fanned with a straw fedora.

The guide sat the group down – front row, of the Amphitheatre remains. She pointed and talked cathartic theatre. The group nodded. The two men took turns taking instamatic shots. The sun was a roaster – phoenix-conjuring hot.

The guide put on a tragic mask. The group laughed. The men caught each other’s eye – mutual recognition flickered between them – that the joke would soon be over. The guide grooved on pain, purging, destiny, death. The two men joined in the applause. The tour was done. Almost time for the kill.

The taverna was boisterous with bouzouki and accordion. They sat on a marble table laid with a red-checked cloth. The waiters brought meze dishes and a bread basket, wine in a woven decanter. Bronco bookmarked a phrase book and left it out for show. Honcho fiddled with the flash bulb on the Kodak, a brown satchel between his feet. They ate stuffed vines and tapenade and went through the plan. Bronco used an obtuse code to test Honcho.

After dinner, they moved outside, sipped Campari and Cinzano and tipped with petrodollars. A waiter returned with the change on a floral saucer. Honcho waved it away. Bronco nodded assent. The crooked lanes of Plaka were frowsy and full.

A shoeless gypsy girl wandered over pleading Greek. Honcho slipped her a buck to beat it. They each stitched fingers over Gitanes, smoked and went over the sequence again, but in reverse. Bronco winked at Honcho. Honcho didn’t flinch. They agreed it was time. Their glasses clinked. After this hit, they’d never meet again.

The concierge didn’t recognise them, but made the two men for business travellers – the straw hat, satchel, camera strap, the unseasonal wingtips and Trench Macs. They watched the elevator retreat up behind them. One of them folded a pocket map. One of them adjusted his gloves. They shook hands before the double lobby doors and went their separate ways into the density of night around Omonia Square.

The Next Noon. Locked room.

The chambermaid knocked softly, then increased the pitch. She rapped and banged to no response. The keyhole was plugged with spackling paste. A noxious waft uncurled in the air. She threw up her arms in protest to the silence. There was a chill in the corridor. The insidious cold of no answer to come.

She pushed her trolley along and cursed to return, to rouse again later, when she’d discover:

The counterpane derangement.
The chloroform mopped towels.
The uncradled receiver.
The bruise-bloated body in the tub.
The gutted briefcase.
The Rolodex minus C to D. 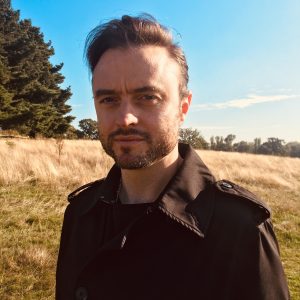 Samuel Prince lives in London. His poems have been published in various journals, including Atticus Review and Deep Wild Journal, and his short fiction has appeared in Amsterdam Quarterly. His debut poetry collection, Ulterior Atmospheres, is forthcoming from Live Canon.