I came here to find love, just like all the other participants on this island. Difference is, I meant it.

Those of you who are taking to social media to express your shock, your confusion, stop. And pay attention.

We don’t have much time.

Oh, and in case I don’t get a chance to say it later, this is all your fault. No, no, don’t sit there and act all innocent, all offended. What’s about to go down, it’s exactly what you’ve been dying to see. It’s why you tune in to the show each week and live-tweet each episode and stream the reruns of previous seasons whenever a new one’s not available. And you know good and goddamn well it’s pitiful and wrong. That’s why you tell everyone you’ve never seen the show, why you shame those who admit they do.

Well, it’ll be pretty hard to deny or forget you watched tonight’s special “episode.” Yeah, I know, the host and the network are always saying shit like that, always hyping the show, always telling you to “Get ready for the most dramatic and shocking conclusion ever.”

This time, it really is reality. You’ll see once this is all over and you click off to watch the news.

By the way, sorry about my mascara and my hair and my torn top. Sorry about all the sweat and the abrasions and the blood. I couldn’t get anyone from Makeup or Wardrobe here tonight.

And those sirens you hear, that’s the reason why we have to hurry.

I had hoped to revisit some of the favorite moments from this season, but apparently the police have gotten a quicker jump than I expected, so let’s get right to it.

Over here we have audience favorite, Lance …

Bob, goddamn it, keep the camera on me and make sure you get Lance in the shot. And stop zooming in on my gun, please. Eyes up here, mister.

Okay, here’s Lance, everyone! Who can forget when he first popped onto the scene—hopping out of that stretch Hummer wearing an Armani suit with no shirt underneath and those size-thirteen giraffe-leather boots and his biceps threatening to burst through his custom-made coat sleeves. Fun fact: Not pictured in that iconic shot was Lance’s real name—Michael Harwell—or the sexual assault investigation that’s been pending since a few months before Lance-I-mean-Michael arrived on the show to wow everyone with his winning smile and dancing pecs and adorable inability to pronounce the initial l in vulnerable, his favorite word.

Look at him now. How could anyone resist such vunerability.

And who can forget Lance-I-mean-Michael at the first cocktail party? The one where he was overheard telling his bro squad he could never “get with” a girl like me because I’m “too ethnic.”

So, Lance-I-mean-Michael, what do you have to say for yourself? OOPS, sorry, I forgot—you can’t say anything. Hard to talk without teeth and with all that electrical tape covering your mouth. Relax, the compression should help keep the swelling down. But only if you stop trying to scream.

Lance-I-mean-Michael, since you’ve been such a trooper throughout this entire ordeal, here’s a rose. I’ll set it here beside your bound feet. Maybe you’ll even get a chance to pick it up—though that would entail you somehow getting your hands free before the big finish.

Hey, can we get Lance-I-mean-Michael here some ice? And maybe some smelling salts?

Just kidding, folks. There’s nobody here who can help. Well, there are those two cops who just arrived, but honestly, they’re too late.

No, officer, YOU drop YOUR gun! I finally got my one-on-one with this guy, and you’re not going to ruin it!

Okay, Lance-I-mean-Michael. This is it.

Bet you never thought we’d end up together forever. 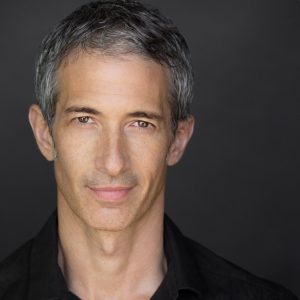 Greg Levin writes subversive thrillers and crime fiction. His novels include The Exit Man, Sick to Death, and In Wolves’ Clothing.

Levin's work has been optioned by HBO and Showtime, and has earned him a number of awards and accolades. He’s won two Independent Publisher Book Awards, and has twice been named a Finalist for a National Indie Excellence Book Award. In a starred review of In Wolves’ Clothing, Publishers Weekly wrote, “This author deserves a wide audience.” Levin's agent and mother agree.