The Miami skyline dangled over lavender clouds like stalactites made of pink light and shadows.

“I could die right now,” she said.

“It would take at least eight—”

If the pooling blood hadn’t already flushed his face, Jaime would have blushed.

Jaime sat up too. With the world right-side up again, he checked his watch. Nine-thirty.

“I think we have to go. I promised your dad you’d be home by ten.”

Alba put her hand on Jaime’s thigh. Even with the denim between them, he felt a tingling where she touched him.

“I wish we could stay a little longer,” she said.

He thought about the promise of Alba’s hand on his leg. His gaze ascended from her bronze lips to her almond irises and stayed there, until he felt like he might fall into her eyes.

“I promised your father,” he said.

The cherry red ’86 Camaro that Jaime had spent two thousand dollars of grant money on was a decade out of style, and dinged up. But it was a convertible. He let the top down before they turned onto the MacArthur Causeway. The memory of Alba’s smile as the wind whipped her hair would stay with him until the day he went down in a hail of bullets in Little Havana, many years later.

Inside the parked Camaro, Jaime kissed her tenderly but timidly, aware that her father, Juan Carlos Rubio, might be peeking at them through the blinds. Sure enough, Juan Carlos pulled open the front door just after Jaime and Alba got to the porch. He greeted Jaime as he always did, with a vigorous handshake and a pat on the arm. “Hasta luego, Científico.”

Jaime didn’t believe it until he saw it himself; the holes in the apricot walls, the shattered windows Juan Carlos had peered through just the night before. The bullets had missed Alba’s mother, Damarys; she’d been sweeping the gazebo. They had missed Juan Carlos, too; he’d been closing a sale on a four-bedroom in Coral Gables. The bullets had not missed their target—Alba’s brother, Carlito. And they had not missed Alba.

Carlito was still breathing—fighting for his life in Intensive Care at the University of Miami hospital downtown. Alba was not.

Jaime’s world turned upside-down. For days after her death, he cried like newborns cry. Like it was the only thing he knew how to do.

Then he got to work.

Jaime used his lab coat and UM student ID to get into ICU. He pulled a ski mask on and locked the door when he found Carlito’s room. He twisted the I.V. needle in Carlito’s vein and pressed on the bullet wound in his leg until Carlito screamed into the pillow covering his mouth.

Then, he got a name.

Jaime invented this story in his head about how he was working on a project for a scholarship, in case anyone asked why he was leaving the lab facilities on campus after midnight for days on end. But nobody ever did.

They say you’re the boss around here,” he told Rodrigo Marquez. “This shit,” he dropped the bag of multicolored pills on Marquez’s coffee table, next to a pile of white powder. “It’s magic. But I don’t want to step on any toes—especially not yours. First one’s free.”

Marquez bared a gold-toothed grin. “Try it with us,” he said.

Jaime took the only pink pill from the bag, then handed the rest to Marquez. He took one, then passed it around to his lackeys.

They wouldn’t know anything was off until half an hour or so had passed. Jaime had designed the pills that way. After twenty-five minutes, he said he needed to take a piss, and locked himself in the bathroom.

Jaime watched his unflinching reflection and listened to four men and two women retching and convulsing in the living room.

He walked out of Marquez’s house, leaving six bodies covered in blood and vomit, and never, ever looked back. 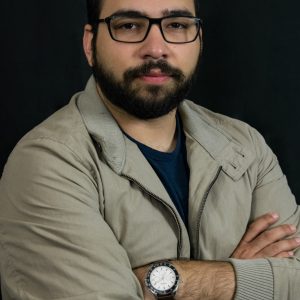 M.G. Juelle's rap sheet is too long and winding for an honest job, so he tells lies for a living. He studies English Literature and Creative Writing at Florida International University in Miami, where he lives with his cat, Domino.