The Shape of Things

The space between us is an anticipation for violence. I see it in her eyes. I feel it in my hands. Her skin above her temples pulse like the knuckles on a squeezed fist and I can see it from across the room. Every six months, for the last six years, she sits in a solitary chair away from the others, and waits her turn to speak. In the meantime, her eyes never leave my direction. Her stare is a haymaker.

She hates me, and from the look of it, I deserve every inch of it.

The first time she came to my probation hearing, I smiled at her. She looked familiar. She looked like someone I had smiled at many times before. A favorite cashier, maybe. A neighbor I waved at every morning, perhaps. I didn’t know. I stopped wanting to remember things after the accident. After what they said I did. When I smiled at her then, she rushed across the arms of two men and spat in my face. She clawed at my neck and left a map of blood. The men laughed. She growled. I was then forced to sit and listen to what she had to say.

She said, “We argued and it was bad. He grabbed our son and drove off. He was drunk when he left. When the phone rang an hour later, when the cops told me what happened, I crumpled onto the floor like a wet rag.”

She said, “I want to die every time I pass that intersection.”

She said, “It should’ve been him instead of our beautiful boy.”

All the heads in the room turned to me like haunted statues when I was asked if I felt remorse for what I’d done. I said, “I don’t remember her, her son, or that night.”

Her scream after I said it was thick and loud and shaped like an axe. Her sadness had weight and velocity. It slammed into me like a collision of metal to bone. I was back at that intersection, holding the head of a dead child, trying everything to forget I ever existed. I repeated, “I don’t know anything,” until she was dragged out. The entire room went quiet and nobody wanted to look me in the eyes.

That was the first time, six years ago.

But I do know this—our shirts and pants are light blue with block numbers across the right side. I know they wake us at seven in the morning every day and we slowly shuffle like a calm lake towards food. I know this as well- after breakfast, I shower under water so hot my skin blisters. And by lunch, I am covered in sweat and sawdust. I know that if I work three days assembling chairs I will have enough on my books to afford soap for the week. I know that at 9pm when they shut off the lights, it is easier to sleep when you know the shape of a scream than to remember the reasons behind it. 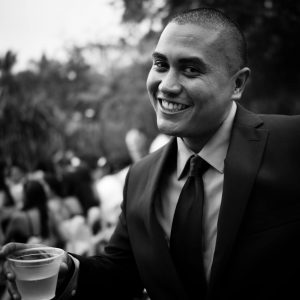 Jaylee Alde is a Kundiman fiction fellow. His work has appeared in McSweeney's, American Bystander, Thrice, and other fine publications.