A scrapbook, that’s what Jen keeps calling it.

No, a scrapbook’s for paper doilies pasted on pink and blue stock, with oh-so-pretty red flowers along the edges. This book is but a cheap loose-leaf binder filled with news clippings Scotch-taped to plain paper.

I think this but don’t say it, not to Katie’s sister. She means well. And whenever I dredge up a new article and call her up about it, she makes the half-hour drive and comes right over.

The latest clipping, one I just trimmed with my scissors and taped to paper, shows Jeffers in his prison grays beneath the headline: Jeffers granted early release for good behavior.

In prison? I ask. Aren’t you supposed to be on good behavior?

I slam the binder shut. Then fling it open again. I land on the article that started it all and fall silent. Jen, behind me, lays a hand on my shoulder.

Maybe you should set this aside, she whispers. Look at your albums. Something positive.

Positive? Seeing Katie’s face, rosy from exertion after our hikes and climbs and spirited jaunts, sometimes hurts worse than the cold print in all these articles, even this one, the one the binder’s turned to.

She was waiting at a red light when her car was plowed into from behind by an SUV doing seventy in a thirty. The outcome? Katie with a shattered spine. Jeffers with bumps and bruises, failing the walk-and-turn but still walking.

I thumb past item after item about all the legal hoops until I finally hit the item where the sentence is handed down.

Hey, longer than the five months he got years before for swerving into the convenience store he bought his liquor from.

That bit of old news is right here.

And here, next to it, is the interview after those five months vanished to nothing. A reporter asking, why do you keep doing this? And Jeffers answering, doing what? This? Swilling this fine stuff? It keeps me company. Better than you. Now get the **** off my porch.

The stars not mine but the article’s.

I skip ahead. Jeffers’s lawyer, the best his money can buy, slamming the idea that Jeffers can be blamed for whatever complications occur in a wrecked spine. Nice try on the life stretch. The two years stay.

And then what. Not even two years. Jeffers called his prison guards Sir, and now he’s back on the street.

Weeks later, Jen shows up. This time she has something for me rather than the other way around. She unfolds the local rag and hands it over. I make sure she sees my eyes move. The body of a man id’ed as Richard Alman Jeffers discovered at the bottom of a ravine. Stabbed through the eye, the eyeball and the sharp instrument nowhere to be found.

Jen leaves the paper with me, touches her hand gently to my cheek. Maybe now we can put the scrapbook behind us, she says.

Yeah, maybe, I say. I stand at the door and watch her get in her car and pull away.

Back inside, I reach for my own copy of the paper. Rip out the article. Take the binder and snap open the rings. Slip in a fresh page. Before taping the article to the sheet, I trim it into a neat rectangle with my scissors, not giving a good goddamn what pretty red remnants cling to the newsprint’s edges. 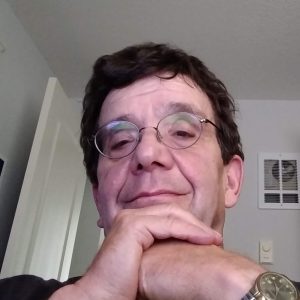 Martin Zeigler writes mystery, science fiction, and horror. His stories have seen the light of day (or the dark of night, depending) in Spinetingler, Mystery Weekly, Bourbon Penn, Over My Dead Body, as well as in various anthologies (for instance, Insidious Assassins, Zippered Flesh 3, A Sharp Stick in the Eye And Other Funny Stories.) Besides writing, Marty enjoys taking long walks, watching movies, and dabbling on the piano. He makes his home in the Pacific Northwest.