Bobby Wayne Boyd was a sucker for long legs, short skirts and tube tops, so when he saw Evangeline wrestling with the groceries in the back of her ’87 Toyota it was love at first sight. He couldn’t tell if the tattoo on the small of her back were angel wings or a Harley Davidson logo, but he was positive he’d never seen anyone like her at the Honalee Trailer Park. It took him three days to work up the courage to knock on her door.

When she answered, she was wearing the kind of silky white robe that stops mid-thigh on a short woman. Seeing as she was tall, Bobby Wayne got his money’s worth when he looked her up and down and up again. “I’m Bobby Wayne Boyd,” he said. “If you ever need help with your theptic tank I’m the man to call.”

Bobby Wayne took it as a very good sign that she didn’t react at all to his lisp.

“Every woman needs a good pipe laying man,” she replied. “I’ll keep you in mind if I’m ever in need.”

“I’ll thee you around then.”

Over the course of the next month Bobby Wayne worked his way into her life by being close and helpful. She wasn’t bothered at all with his speech impediment, and he didn’t care about her taking her clothes off for cash. They were two peas in a pod, and it wasn’t long before Bobby Wayne was thinking marriage. He still had the ring his ex-wife had left when she ran off with the man she met at the ‘Wheel of Fortune’ auditions in Fort Smith, so he took it to a jewelry store to get cleaned one Saturday morning. He planned to pop the question later in the day before her shift at The Dollhouse started.

When he pulled back up to the trailer park, there was a black Cadillac he hadn’t seen before parked in front of Evangeline’s single wide. Bobby Wayne heard the shouting as soon as he got out of his truck, so he grabbed his tire thumper, ran to the door, and threw it open. A short, fat man in a black suit was waving his finger in Evangeline’s face and cussing her out.

“What the hell ith going on in here!” Bobby Wayne shouted.

The man turned toward Bobby Wayne. “This here don’t involve you. Get outta here before you get hurt.” Evangeline’s eyes told Bobby Wayne all he needed to know.

The first blow with the tire thumper would have been enough. Seven was definitely too much. There was blood everywhere, and the man was sure enough dead, but Evangeline was safe.

“Who ith he?” Bobby Wayne asked as the adrenaline began to wear off.

“One of the regulars from a club in Tulsa I used to dance at. Thought he owned me. I’ve been running from him for three years.”

After a brief police investigation, the District Attorney declined to prosecute Bobby Wayne, saying it was a clear case of self-defense given the gun they found in the man’s suit pocket and the shovel, body bag and plastic ties they found in the Cadillac. Bobby Wayne and Evangeline were married later that summer in a private ceremony at a little place near The Lake of the Ozarks and lived mostly happily ever after. 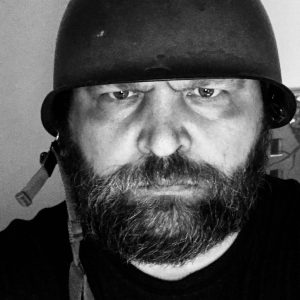 Dennis Smith is an Arkansas based storyteller whose High School English Teacher told him in 1989 he should write for a living. He didn't listen then, and he's making up for lost time now.