Vic Has Got to Die

Anton fell to his knees in Vic’s front hall, bleeding from four or five wounds. He had lost count during all of the shooting and stabby-stabby and was busy holding his guts in so maybe he could make it out before the police showed up. He looked up at the ostentatious piece of shit front door with deep wood carvings and a brass handle. Vic had crowed how he got it special ordered from the Philippines.

Fuck, Vic, Anton thought. Vic was dead, along with four other guys. Each got what they deserved. They made their choices, forgetting that loyalty is everything.

Anton touched the wall with a bloody hand to steady himself. The other hand on his stomach felt hot from the blood. He frowned, wondering if  it was the other way around, that his hand was growing cold. Didn’t matter really, he was running out of time. With a grunt, he rocked forward and got a foot underneath himself and started to stand.

—Three weeks ago a coke rattled Vic decided there was a snitch in the group and that just couldn’t stand and since Anton wasn’t there it was easy for Willie, who was now dead in the living room, to finger Anton, Vic agreed and wanted it taken care of but the fools who went after Anton got his girlfriend Cassie and his baby girl instead, Cassie was in the ICU and just might make it, but it still meant that meant Anton had to kill Vic, and boy did it feel good putting two rounds into Vic’s chest after finding him in his bedroom, begging—

Back in the world, Anton licked the sweat from his upper lip and put a foot forward. His body felt heavy, like he was moving through a snow drift, as he wobbled on his feet. A red smear followed his hand as it slid across the wall, underlining the portraits of Vic’s grandparents. Three hard steps and he was out of wall with another six to the front door.

He had never bled like this and wondered if this was what dying was like, a drifting away. If this was the end, it was worth it. Anton leaned forward and let his momentum carry him halfway to the door when he heard it.

A cough. From upstairs.

Anton turned and looked up the stairs. He had killed everyone in the house, he had watched carefully before he came in, he knew who was and wasn’t in here, he was sure, so maybe he imagined the—

Anton’s shoulder’s sagged. Vic. He wasn’t dead. Not yet, anyway.

The cops were on their way, someone had to have heard all of the shooting and the screams, what if they got here and Vic’s stupid coughing led them right to him, and they saved his life, then all of this would be for nothing. His baby girl, Cassie. One gone, one maybe dying.

Cough. Followed by a groan.

Sirens in the distance, Anton turned away from the door. Three steps back to the wall, three more to the stairs, twelve to the top, fifteen to the bedroom…

But then, soon, maybe even in the next five minutes Vic could be dead and this coughing was how the bitch was going to go out, real slow like, knowing this was it. Anton smiled at the thought and looked over his shoulder at the door. He should just keep going, get out, climb in his car and get the fuck away because Vic was gonna be dead. He looked down at his bloody hand. So would he if he didn’t get to the hospital soon.

And if he was dead, who would sit next to Cassie, look her in the eye and tell her it was done… 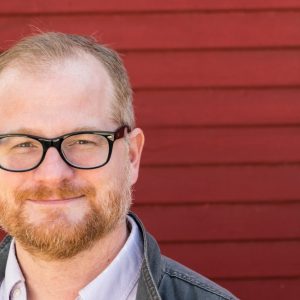 Having grown up in Normal, IL, Lawrence Allan is Midwestern as fuck, and loves heroes who use humor as cover for their emotional trauma. For a time he was the highest paid writer in Pakistanti TV, writing three serials, including Qaatil, Pakistan’s first tele-thriller. His short story “A Big Favor” was published in the award winning crime anthology WRONG TURN, “If You Build A Robot” was published by Daily Science Fiction and he is currently shopping around his first novel. He is the recipient of the Michener Fellowship from the University of Texas at Austin where he received an MFA in Playwriting. He lives in Los Angeles raising a bi-cultural, bilingual kid with his lovely wife.