We Take Care of Our Own

Chico jumps the curb and races the van over the sidewalk, his knuckles tight on the wheel. He hits the brakes at the front entrance, close enough to trigger the automatic double-doors. Benny, Lozano, and I stream out of the van, a typhoon of ski masks and Hefty bags. It’s 9:00am and the drug store is busier than any of us expected. Lines at both registers.

Lozano climbs the pharmacy counter and wags a janky .38 over the frightened customers. Some have their hands up and some are face-down on the floor like they’ve seen this movie before. The pharmacist stands at his terminal, fingers frozen over the keys. Benny gives him a knee to the thigh and he slowly folds to the floor.

We shake out our Hefty bags and hit the shelves.

Anything with Oxy or Perco is golden.

Chico honks the horn and Benny cinches the bag.

I kneel over the pharmacist. He smells like hot piss. Tears running down both cheeks.

His hands shake, lips quivering. I give him a hard slap to help him focus. “All the insulin is in the cooler,” he says, “Under the counter.”

I sweep the cooler and dump it all in the bag, jump the counter and head for the door. Some of the customers are starting to get up. They’re recording me with their phones. Live-streaming for their social media cred.

Outside, the van is rolling down the parking lot and the door is sliding shut. I hit the asphalt running and catch up before Chico makes the corner.

I set the insulin on the kitchen table and crack a beer for the old man. He looks terrible. Unwashed hair. Eyes like dark bruises. But he’s happy to see me.

“How much did they give me this time, mijo?”

“About fifteen vials,” I say. “They were generous.”

“I told you the VA would come through. This country always keeps its promises. We take care of our own.”

“I bet they remember everything you did, Pops.”

“Well, of course they do. I made sergeant in three years.”

I clean the back of his arm, load the shot.

He grits his teeth and swigs the beer when the pain comes.

Another tide of ski masks and Hefty bags.

We jump the counter like a sunrise war party.

Lozano’s gun goes off accidentally. He turns it over suspiciously, as if it has a mind of its own. Nobody’s hurt, but it sends the customers into a wild panic. A mad rush for the door.

Chico honks the horn and everyone cuts their losses.

I find the cooler in the back of the pharmacy and swipe the shelves clean. The old man’s empty and the VA clinic has been closed all week. By the time I jump the counter and make it outside, the van’s already squealing onto Front Street, police cruisers howling through the intersection.

I cross the parking lot toward River Street, ski mask hugging my sweaty face. I cut between the parked cars and careen through the landscaping. On the other side, there’s a young cop waiting for me. Maybe twenty-one. Glock in the air. He gets too close so I slap the gun from his hand and give him a hard jab to the chin. He goes down so quickly the radio pops off his shoulder. I cross the road and trudge into the San Lorenzo River, swim the shallow currents toward the Beach Flats.

“How much this time, mijo?”

“The clinic gave us even more today,” I say. I fish around the bag for the vials. I’m soaked through. River water draining from my tennis shoes. “All for free. You must have been one of their best men, Pops.” “No, mijo. But it’s like I told you — we take care of our own.” 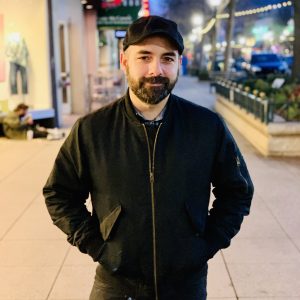 C.W. Blackwell is an American author from the Central Coast of California. His recent work has appeared with Down and Out Books, Shotgun Honey, Tough Magazine, and Reckon Review. He is a 2021 Derringer award winner and 2022 Derringer finalist. His debut fiction novella Song of the Red Squire was published in 2022 from Nosetouch Press.