My heart thumps louder than the Wrong Note’s jukebox when he ambles up to the bar. Who is that? He looks like a beat-up old rodeo cowboy that’s been kicked to hell and back, grinning all the way.

By 10 PM I know his name’s Jesse and he hauls furniture for a moving company. We’re yelling over the crowd, pressed together against the bar like two beers in a six-pack. I feel him gearing up to kiss me.

That’s when Mama’s favorite hymn pops into my head, that she chose for her funeral, which I pray will be soon. About that crossroads in life where you must choose the high or low road, no turning back.

Jesse’s warm sweet lips close over mine. I hear Mama’s voice sneer at me, You’re drunk, Rolene, and I sneer back, So what? I’ve been waiting forty-two years for this.

I can’t stop Jesse from walking me home, though I sure don’t want him to meet Mama. I explain how she hates me because our house will come to me when she dies, and seeing as she’s too fat, lame, and poisonous to live without me, she’s terrified I’ll shake her loose. I tell him about high-school graduation, how everybody else got money or an iPhone from their parents, and I got a pair of white gloves and a Bible with a note from Mama: Never forget where you belong.

Jesse laughs, bless his heart. “Don’t you worry, Rolene. I’ve been up against worse.”

He’s already told me he’s fresh out of rehab. Prescription painkillers for a back injury, he said. Some women hold that against a man. Not me, I said. When I get a dog, it’ll be a mutt from the pound, that hit bottom and can’t get over his change of luck.

Mama pretends she’s charmed. Meaning, whatever Rolene told you, it’s all lies. She sends Jesse to the kitchen for a glass of water. Then she says, “You’re a damn fool, girl. Only one thing a slick buckaroo like that wants from a frumpy dumpy spinster, and I promise you, he ain’t getting my house.”

And I’m looking at her, this mean old rattlesnake coiled up in Daddy’s armchair, and the plan just hatches itself like a baby chick. Jesse hands Mama the water, and she swallows her pain pills, and accidentally splashes herself so he’ll have to pat her dry. While she’s beaming at him, I shake four pills out of the bottle and put it back on her tray.

I knew I’d find a use for those white gloves someday. That night I spread the pills on Daddy’s workbench in the basement. The Rat-Bane’s still in the cupboard. The first pill falls apart when I soak it, so I go find an eye-dropper. I drip Rat-Bane on the second pill and let it dry. Same again the next day. When the pill’s dried hard I sneak it back into the bottle. Just one, so if it works, no busybody will find cause for suspicion.

Jesse wants to take me out for dinner Friday. To make sure I’ll miss him, he says, while he’s on the road next week. I can’t believe this is happening. Sure, I say. Pick me up at six.

Mama invites him to sit with her while I round up my coat and purse. I hear them laughing and flirting. Amazing! When I tiptoe in the door after midnight, she’s asleep in the armchair, smiling like a baby.

I think: This could be our life! I’m a little tipsy but not drunk. We could all be happy! Imagine!

Then, OMG, I remember that pill. I start searching for the yellow bottle.

“Mama. Did you take your pain pills?”

“No. I been feeling so good, I rather keep my head clear.”

I send God a quick thank-you prayer for saving me from a terrible sin. “Did you put them someplace safe?” “No need.” She grins her yellow teeth at me. “I give ’em to your buckaroo buddy with the bad back. Jesse.” 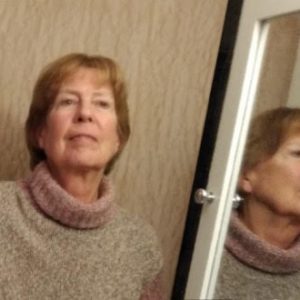