“As alibis go, that’s as good as it gets,” said Tillotson.

He gave her a look.

“Sorry. No, none. Every Tuesday morning at ten, like he’s punching in for work.”

She leaned against the counter and studied Tillotson as he sat at her kitchen table. His poplin suit looked as if he had slept in it.

Which she knew he wouldn’t until he cleared this case.

He set his coffee cup down, but he made no move to get up. Diana took the hint and reached for the pot on the burner beside her. She poured for him and for herself and took the seat across from him.

“Right when people say the marriage was really going bad.”

“Well, duh. Guys don’t come to me if things are good at home.”

“That he could have been setting up this alibi? Maybe, but in a year most guys would let something slip. He never talked about his wife at all, which is pretty unusual.”

“Was anything different? Like, did he seem keyed up?”

“I’m not sure I could even tell with him. You’re thinking he hired a hitman?”

“His financials don’t give us a clue. No large withdrawals, no unexplained checks.”

“Maybe he really had nothing to do with it.”

She and Tillotson looked at each other. He knew why she didn’t mind talking about this client. It was because she had nothing incriminating to tell.

Someday she might have to choose between Tillotson and a client, and that would be a bad day for this relationship that helped keep her in business.

Tillotson broke the silent communication off before it got too weird and started making her feel like his wife. He gulped his coffee. It was scalding hot, but his expression didn’t change. This time he did get up and head for the door, where he paused and looked back.

“I don’t need to tell you—don’t talk about this with him.”

“Just what I need. Another lawyer.”

Tuesday at 10:58 Diana paused at the door and smiled at the client. She gave a little wave with her left hand, as she swept her money off the flimsy table with her right. It was the same kind of misdirection that stage magicians practiced. If the client felt like it, he could pretend that this wasn’t business.

But before she could stop herself, she looked down at the white envelope. It was too thick and heavy for the usual three hundred-dollar bills.

The client was still in bed, naked under the sheet. He smiled, as if forgiving her for the lapse

“Hope you don’t mind twenties,” he said. “I had some left over.”

It took her a moment to process the words, but then they shocked her like a taser.

“It’s amazing what you can do with a few twenties every week, if you plan far enough ahead.”

Now was the time for her to say something light and dismissive, but nothing came. His smile disappeared, as he listened to his own words.

“You know about my wife.”

“I read the papers.”

“What I just said? It’s need-to-know. Which means nobody. Clear?”

In case he didn’t believe her, Diana opened the door to remind him that one step would take her outside. Even at a hot pillow motel like this one people would remember a naked man in the parking lot.

She closed the door from the outside and turned toward her Taurus. She always left it unlocked in case she needed to make a quick getaway. So who was sitting in the passenger seat?

She climbed in next to him. His poplin suit had picked up more wrinkles.

“I could have just leaned on you,” he said. “Would you like that better?” 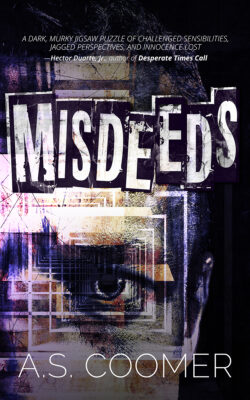